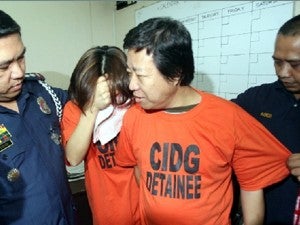 Accused of stealing illegal drugs and money from the house of a recaptured Chinese drug trafficker, sacked operatives of the Criminal Investigation and Detection Group (CIDG) lashed out at Justice Secretary Leila de Lima, on Wednesday, for taking the allegations against them as Gospel truth.

Senior Supt. Jose Mario Espino said they would file a perjury case against the two men who accused them of taking shabu (methamphetamine hydrochloride) and cash from the house of Li Lan Yan, alias Jackson Dy.

Espino, who was axed as chief of the CIDG’s Anti-Organized Crime Division (AOCD) over the accusations, personally led the police operations on July 13, which led to the re-arrest of Li and his wife Wang Li Na in San Juan City.

“We were expecting a spot promotion. Instead, we were placed under spot investigation,” Espino lamented at a news briefing at Camp Crame.

“What’s worse is that our enemies now are our fellow government officials,” the visibly dejected police official added.

Espino also maintained that Li’s recapture was not a result of the arrest of slain Ozamiz gang leader Ricky Cadavero, who was held by elements of the Calabarzon police office in Dasamarinas City a day before CIDG operatives swooped down on Li’s lair.

He also downplayed earlier reports that Cadavero’s group sprung Li, his wife and another convicted Chinese drug trafficker, Li Tian Wa, from the jail guards of the Cavite Provincial Jail in Trece Martires City on Feb. 16.

“The men who helped (Li) escape belonged to a different cell of the Ozamiz group… who were also involved in kidnapping and gun-for-hire activities,” he said.

“Cadavero was the first to be arrested. That’s why we got the information (on Li’s location),” Purisima earlier said in a press conference hours before Cadavero was killed by his police escorts in San Pedro, Laguna, on July 15.

Espino maintained that they did not take illegal drugs and money from Li’s house during the raid, saying the two alleged witnesses who were interviewed by ABS-CBN reporter Anthony Taberna were “lying.”

He also denied that the first man who spoke with Taberna was a policeman.

He identified the man as Roy Delvo Miralles, who he said was a security guard of the gated subdivision in San Juan where Li rented a house.

The second witness, Espino said, was a certain Dino, who worked as a gardener of the subdivision and “moonlighted as garbage collector.”

The police official claimed the pair made up the stories against him and his men after he failed to “give additional reward money” to them for helping the CIDG operatives in identifying the Chinese couple.

“We initially gave them P5,000 each as reward for helping us in carrying out the operations. But they asked for more when they learned that the individuals we arrested were big time Chinese drug traffickers,” Espino said.

“He (Miralles) is not a policeman as what our good justice secretary mentioned. If he lied in claiming to be a police officer, then all his statements will be all lies.”

He maintained that only 19 operatives of the CIDG-AOCD took part in the early morning operation, which he described as a “highly sensitive” police operation.

Besides him, he said only 11 other policemen entered the house while the rest positioned themselves outside.

Contrary to his claim, Espino said Miralles, of Guard Shield Security Agency, was not able to enter the house and witness the arrest of the convicted Chinese drug traffickers.

“The security guard and the gardener were used as informants only hours before the operation… to confirm the identities… of the Chinese drug lords. The two were not allowed to enter the compound,” he said.

He said Li’s drug syndicate may have “recruited” the security guard and the gardener to discredit the members of the raiding team.

Espino said it was also possible that the syndicate had paid off some members of the media to peddle lies against them.

“We have also been investigating this matter on our own. We have already put together the pieces of the puzzle. Who are our enemies? It’s the drug sydicate, which uses money and not just guns,” he said.

“Their money had reached all levels of the government and even to some members of the media. We all know that. Some of our enemies belong are also from the government.”

Espino did not hide his resentment toward De Lima, saying: “We’re really disappointed because she had already prejudged the case. She said what the witnesses said were believeable.”

“What if they were not admitted by the WPP (Witness Protection Program) because they lied? What will happen to us? Our reputation had already been tainted. Our families are already affected,” he said.

In separate TV interviews, the pair claimed the CIDG agents took some P20 million in cash and about 80 kilograms of shabu during the raid.

“Remember they (convicted Chinese drug traffickers) are fugitives and were living like hermits inside the house to (avoid being detected by the authorities),” Espino said, stressing that the raiding team did not find any illegal drugs and cash inside the house.