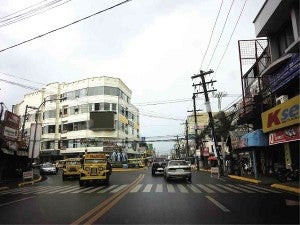 A confluence of factors, exacerbated by high system losses due to a decrepit power distribution system, corruption and patronage politics, buried Olongapo City’s Public Utilities Department (PUD) in a mountain of debt amounting to P5 billion to power suppliers and threatened to cut the city from the Luzon power grid.

Former Mayor James Gordon Jr. also attributed the crisis to low collection rate due to nonpayment or debts incurred by consumers, widespread energy theft and corruption in the PUD .

The situation worsened because of interests imposed by Private Sector Assets and Liabilities Managaement Corp. (PSALM), the refusal of the Energy Regulatory Commission (ERC) to grant an increase in power rates, and the years of delay in the PUD’s privatization.

Gordon said the debts started piling up during the term of his predecessor and sister-in-law, Kate Gordon, with the city posting P200 million in obligation to National Power Corp.

Even then, the 65-year-old system of the PUD that was inherited from the Americans was showing signs of heavy system losses, along with issues of corruption attached to the agency, he said.

“My predecessors were lucky because when the US naval base was still around, the Americans virtually took care of [the system’s] maintenance. When transformers were needed, these were given to us by the Americans,” he said.

Gordon said Olongapo enjoyed one of the lowest electricity rates in Central Luzon and increasing these to get much-needed revenue did not happen because the ERC refused to allow it without pouring investments into the rehabilitation of the system to make it more efficient.

At least P1 billion had to be spent in modernizing the PUD, money that the city government simply did not have, he said.

As a result, Gordon said that from the start of his three terms as mayor in 2004, the privatization of the PUD was a priority.

“I knew it would lead to more and bigger problems if the PUD was not privatized. There will be uncontrolled blackouts as the infrastructure breaks down. The debts will also pile up due to the high system losses and low collection rate, together with the compounding interest rates that power suppliers were imposing,” he said.

Gordon said privatization was the key to solving the power distribution problem. “But from the beginning, there was resistance [not only by the political opposition] but also by the PUD workers, who relied on [the department] for their income,” he said.

But Mayor Rolen Paulino, the city’s former vice mayor, blamed the Gordon administration for the power debt not only for the technical losses but for engaging in “corruption and patronage politics for subsidizing [local and national government entities].”

Paulino acknowledged that he was initially against the PUD’s privatization. “But when I saw that the local government was not able to address the [widespread] corruption in the power distribution system, it was then that I supported privatization,” he said.

He said it was also not true that it was delayed due to the opposition in the city council.

Gordon insisted that Paulino and then Zambales Rep. Ma. Milagros Magsaysay, including opposition councilors in the minority, had opposed the privatization and delayed it.

“This could have been done a long time ago. The reason why I ran for congressman was that I was fighting for debt condonation by PSALM, and to ensure that a congressional franchise was given to the winning bidder of the privatization. All this was delayed for many years, making the situation worse and unmanageable,” he said.

Gordon said it was only when San Miguel Energy Corp. became part of Olongapo Electricity Distribution Co. Inc. (OEDC) when it acquired a minority share in the company did Magsaysay endorse OEDC’s franchise in Congress.

The PUD was sold for P610 million to OEDC, which was given a 25-year franchise to take over the city’s power distributor.

Gordon said that by the time Magsaysay supported the privatization, the PUD’s debt had become so huge and the power outages so frequent.

He said the political opposition capitalized on this issue and used it to topple the Gordons from power in the last elections. Gordon lost in Zambales’ first congressional district race while his wife, Anne Marie, lost in the mayoral race.

Gordon, however, said he tried to make several changes in the PUD, including replacing its manager, to help address the technical issues confronting the system.

The new manager, Louie Lopez, an electrical engineer, said the system losses were “much higher than 35 percent.” This meant that if Olongapo bought P100 million worth of electricity from suppliers, the losses would immediately translate to P35 million for every month of operation, he said.

Out of P100 million worth of electricity that the PUD sold to consumers monthly, it would earn only about P5 million due to the low rate, he said.

“And coupled with the collection or payment rate of consumers of about 50 percent, the PUD was not only sustaining substantial losses but also racking up huge debts,” he added.

“The cap of maximum allowed system loss set by the ERC is at 8.5 percent for private utilities and 13 percent for electric cooperatives. This means that losses above the cap are shouldered by the utility as losses in its operations,” he said in a statement.

“When a utility is suffering from high system loss, it is financially crippling … because it cannot recover the cost of power it has purchased from suppliers. It could not collect the right amount from its customers,” he said.

“High system loss also contributes to potential debts to power suppliers. If the utility with very high losses can only pay the generator based on the amount collected from its customers, then there will always be a balance left unpaid. This cycle will continue and compound until such time the utility can bring down its system losses to the acceptable level of 8.5 percent (for OEDC),” he said.

Lopez said PSALM should also be blamed for the power debt. “They have a disconnection policy. Why weren’t we disconnected when the debt was only about P200 million? Why only now that it has reached billions of pesos? If they disconnected early, then this would not have happened,” he said.

Residents still owe PUD about P120 million, Lopez said. “I’ll endorse that to OEDC so they can cut or collect.”

The receivables, he said, would reach more than P1 billion if these included the consumption of local and national government entities.

Community sources said many households and establishments, with few of them located on Magsaysay Drive, Olongapo’s main street, were under the “protection” of the PUD.

They said these households and establishments, which usually incurred thousands of pesos in power bills every month, were asked to pay only a small percentage of the actual billing in return for commissions to PUD personnel who would reset the meter or take care of the paperwork to reflect the arranged prices.

Sources also said energy theft had been a cottage industry within the PUD for many years. Because of lack of record keeping and infrastructure to digitize billing, records could be easily manipulated or conveniently lost, they said.

When asked about the anomaly, Gordon said: “That’s probably the reason there was so much resistance within the PUD’s privatization. Because they will not only lose their jobs but their other sources of income as well.”

Olongapo has about 40,000 registered consumers of electricity out of a population of 300,000. Thousands of households resort to illegal tapping, Gordon said.

What should be done

Abaya said OEDC must ensure a high collection rate to remedy the situation.

“[There was a low collection rate because] payments from customers are not normally scheduled or collected in a single day or they are sometimes delayed or term arrangements are made for those who cannot pay. However, payment to power suppliers and payments to NGCP (National Grid Corp. of the Philippines) for transmission are on a fixed date and are non-negotiable,” he said.

“If a utility is billed P100 for both power supply and transmission, then the utility must pay P100 on due date. If a utility cannot pay P100 due to high system loss and low collection rate, then it will have to use its own money or borrow money from the bank to cover the shortfall. If not, then there will be a balance left unpaid. This cycle will continue and the unpaid portion will grow if the utility cannot improve its collection efficiency.”

Amount remitted to Napocor and PSALM

System loss (technical and non-technical)35% or P35M per month

Guide in estimating the monthly electric consumption of appliances

Example: 50 watts incandescent bulb at 12 hours use per day