MANILA, Philippines – Budget Secretary Florencio “Butch” Abad on Tuesday turned over the proposed P2.268 trillion to the House of Representatives for its perusal.

This was higher than the P2.006 trillion national budget passed by the 15th Congress for 2013.

President Benigno Aquino III seeks the congressional nod on the proposed budget, which will allocate a large chunk of funds to the Department of Education followed by the Department of Public Works and Highways.

Speaker Feliciano Belmonte Jr. said that this was the biggest budget the government has come up with yet.

The budget was presented in “not one but five volumes,” he said.

Abad expressed hope that the 16th Congress will approve the proposed budget by year end to help them with implementation.

Under the proposed budget, infrastructure development will be supported by a P399.4 –billion allocation next year, comprising three percent of the country’s Gross Domestic Product and registering a 35.5-percent increase from the P294.7-billion alloted for the sector this year.

The administration intends to increase investments on infrastructure to P587 billion and P824 billion in 2015 and 2016, respectively.

The transport and infrastructure program will receive P180.1 billion next year.

The DPWH will get P14.5 billion to construct and maintenance of 679 kilometers of access roads to tourism destinations–this was to aid in meeting the 6.8 million international and 47.7 million domestic tourists target.

Abad said that the Conditional Cash Transfer (CCT) will receive P62.6 billion under the proposed budget. The said funding was intended to cover 4.44 million households and 10.2 million children beneficiaries.

It was also being eyed to provide additional support for high school students, as the Budget chief said that they have observed how many such students were forced to earn a living to support their families.

PhilHealth also stands to get an increased budget of P35.3 billion from this year’s P12.6 billion.

Abad said that P44.6 billion from the DepEd’s P336.9 billion proposed budget will be used for the acquisition of 1.6 million classrooms, the construction of 43,183 and the rehabilitation and repair of 9,503 more.

Looking at the proposed national budget by sector, Abad noted that social services would have the largest chunk of the budget at 37.2 percent (P842.8 billion)–it increased by 20.5 percent from this year’s P699.4 billion.

Third would be the general public services with a 16.1 percent share or P364.5 billion–it increased by P17.2 billion from this year’s budget.

Abad said that debt services would continue to drop to P352.7 billion, posting a lower share of 15.5 percent from 20 percent way back in 2010.

The defense sector would meanwhile get a 3.7 percent (P3.3 billion) increase next year. It has a proposed allocation of P92.9 billion.

One of the things that made this proposed budget different, said the Budget chief, was that they had a new output- and outcome-based presentation of the national expenditure program through a Performance-Informed Budget (PIB) structure.

By doing this, Abad said that “each program and project that we spend on is clearly linked to major final outputs that departments and agencies must deliver according to their mandates.

Abad said that the extensive budget proposal showed “agencies’ mandates, objectives and key result areas, output and outcome [expected from them] in exchange for the budget that they receive.”

“We will have performance indicators and this will enhance the exercise of the legislative branch over the budget,” he said.

Transparency remained the “core” in their strategies in financial management, Abad said.

He added that accelerating budget execution will be part of their reforms.

“When this is passed, the budget itself can serve as the release document or the agency budget matrix,” he said.

This was why they asked the agencies to “disaggregate their budget and submit a list of projects, particularly its location and the corresponding amount,” he added.

Despite the shock received by the government from the alleged P10-billion pork barrel scam, Abad said that they still included a P27-billion priority development assistance fund (PDAF) in the proposed budget.

“That is under investigation so we won’t be assuming. Until the findings get to the President, we will withhold any judgment,” he said.

While many agencies are seeing increased funding for next year, Abad admitted that the subsidy for the Metro Rail Transit (MRT) and the Light Rail Transit (LRT) systems were facing reduced budget.

Belmonte said that he sought to pass the budget “in record time without cuts.”

“Well, cuts are possible but even at this stage the Executive has exerted great efforts for a budget that helps everybody,” he said. 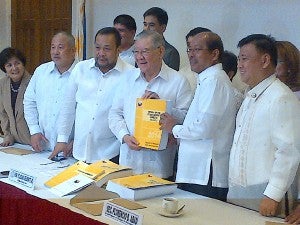 Read Next
De Lima: Some cops in cahoots with crime ring that wanted Cadavero dead
EDITORS' PICK
Acer starts the year off strong with the Aspire Vero National Geographic Edition
4.7 million Filipinos have received booster shots, but that’s still a ‘low’ number – Galvez
Over 3 Million worth of prizes to be won at Smart Padala’s SENDali Manalo Promo!
‘Not yet the end’: Lawyer says Marcos Jr’s DQ cases to take lengthy process
Omicron now shows up in 90% of samples sequenced – Duque
The best of bayside and city living at SMDC’s Sail Residences
MOST READ
Duterte asks: ‘Is COVID-19 airborne?’ Duque blames spread on ‘token compliance’ with rules
Marcos Jr. visits Cebu, stands as ‘ninong’ to mayor’s son
‘Not yet the end’: Lawyer says Marcos Jr’s DQ cases to traverse lengthy process
Morissette Amon recovering after confinement for diverticulitis, tests positive for COVID-19
Don't miss out on the latest news and information.