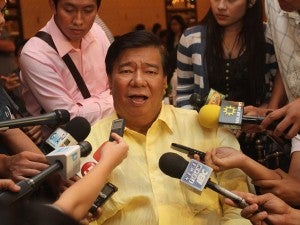 MANILA, Philippines—Newly elected Senate President Franklin Drilon vowed Monday “to bring back the confidence of the people” in the chamber that is embroiled in two controversies involving Senate expense funds and some senators’ use of their pork barrel.

Drilon, a party mate of President Aquino’s in the Liberal Party and campaign manager of the recently victorious administration Senate coalition, received 17 votes from his colleagues, while Sen. Juan Ponce Enrile, the former Senate President, got six votes.

Drilon and Enrile swapped votes, while Sen. Miriam Defensor-Santiago, a bitter critic of Enrile’s and a close friend of Drilon’s, was absent due to chronic fatigue syndrome.

Repeatedly referred to during the election campaign as the next Senate President, Drilon’s victory was a foregone conclusion after the administration Team PNoy coalition won nine of the 12 Senate seats up for grabs.

“It is indeed a great privilege to lead, for the fourth time, this august chamber,” said Drilon in his first speech as Senate President in the 16th Congress.

He called on his colleagues to work for laws that would make most Filipinos feel the country’s economic gains.

“Let us make it clear that we debate because it is only through a vibrant exchange of ideas that we can craft the best laws for economic development and social protection,” he said.

“Ladies and gentlemen of the Senate, now more than ever we have to collectively work harder to craft laws that would have a positive impact on the lives of our people,” Drilon said.

Newly minted Sen. Juan Edgardo Angara, one of those who ran on the Team PNoy slate Drilon managed, nominated the latter for the post.

The new Senate minority, on the other hand, managed to slip in a subtle dig at Drilon over his ties to President Aquino during neophyte Sen. Nancy Binay’s nomination of Enrile.

“Throughout history and the changing tides of politics, the Senate has remained a bastion of independence, beholden neither to one person, political ideology or political party. The people expect no less from this Senate,” said Binay.

Enrile, coming in second to Drilon, is the minority leader.

Estrada presided over the first part of the session while Honasan acted as floor leader until the election of Drilon and Cayetano, respectively.

Drilon took his oath before neophyte administration Sen. Benigno Aquino IV, President Aquino’s namesake cousin and the youngest senator today. He was also the only LP member to win in the last senatorial election.

“[We] recognize that the events of the past months have affected the perception of the people of the Senate. The institution has been affected,” Drilon said, referring to the allegations of funds misuse in the chamber.

“It thus becomes our individual and collective obligation to bring back the confidence of the people in this vital institution of democracy. And the only way to do this is to work harder and show our people that we deserve their mandate and trust,” he said.

The Senate was hit earlier this year by a controversy over the release to most senators by Enrile of millions of pesos from the fund for maintenance and other operating expenses of the chamber and a P250,000-per-senator Christmas gift in late 2012.

The controversy brought to the fore the practice of Senate funds being liquidated using only certifications from the senators and not receipts.

The senators implicated in the more recent Priority Development Assistance Fund (PDAF) controversy involving the distribution of their pork barrel to questionable agencies that resulted in kickbacks have denied any wrongdoing.

Drilon was Senate President three times before. He was one of four Senate Presidents in the 11th Congress, the only one during the 12th, and the first of two in the 13th.

Read Next
Calderon continues winning ways, rules KT100 class of Kartzone Series
EDITORS' PICK
Duterte: When I said I will fight drugs in 6 months, I thought it was like in Davao
Connect to PH’s fastest network with new Signature Plan Lite at only P599 per month
Harnessing technology for quality education
Tips for a cheerful life
Duterte warns of possible lockdown if ‘more aggressive’ Delta variant spreads
Hidilyn Diaz wins weightlifting gold in Tokyo Olympics
MOST READ
Hidilyn Diaz wins weightlifting gold in Tokyo Olympics
Go to war with China over West PH Sea? It will be a ‘massacre’, says Duterte
Hidilyn shoots not only for gold but also for permanent place in PH sports history
Duterte acclaims Sotto: ‘He can become a good vice president’
Don't miss out on the latest news and information.