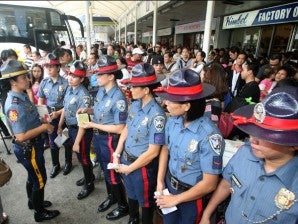 MANILA, Philippines—The Philippine National Police has ordered a “reorientation” of its intelligence unit following the arrest of an undercover agent at the wake of slain Ozamiz gang leader Ricky Cadavero.

At the same time, PNP spokesman Senior Supt. Reuben Theodore Sindac on Sunday said PO3 Richard Ebrada of the PNP Intelligence Group (IG) would be charged administratively for his failure to carry out his assignment.

He said Ebrada, 37, had been charged with usurpation of authority by National Bureau of Investigation agents who confronted him for posing as an official of the Commission on Human Rights (CHR) at Cadavero’s wake in Muntinlupa City.

Sindac admitted the policeman had been sent to the wake to convince Cadavero’s family to help the PNP identify the police officers who supposedly protected Cadavero and his group.

“He (Ebrada) is a PNP member and we’re not denying that. But he misappreciated his task because he is still young,” Sindac said in a phone interview.

“He was (ordered) to do a task. He just didn’t do it properly or correctly… After he posts bail, we will deal with him administratively,” he said.

Sindac said the incident prompted the PNP-IG to order all its new intelligence operatives to undergo a reorientation following instructions.

Posing as a CHR investigator, Ebrada reportedly spoke with Cadavero’s sister Rosalinda at the wake on Friday and asked about the circumstances of his death.

But the policeman raised Rosalinda’s suspicions as CHR officials had interviewed her before he arrived.

When accosted by NBI agents, Ebrada said Chief Supt. Abelardo Villacorta, PNP-IG chief, had instructed him to get Rosalinda’s contact number and ask her if she knew Cadavero’s supposed cohorts in the PNP.

Cadavero, a convicted criminal who escaped from the New Bilibid Prison last December, and his supposed henchman Wilfredo Panogalinga Jr., were being transported to the Calabarzon police headquarters when their police convoy was supposedly attacked by motorcycle-riding armed men in San Pedro, Laguna, on the night of July 15.

Their police escorts supposedly shot Cadavero and Panogalinga when they tried to grab their firearms during the attack.

Sindac said Ebrada’s mission was to speak with Rosalinda and get the names of the policemen who had allegedly received money from Cadavero.

“Basically, the instruction for him was very simple: Try to go to her and find out if he could get the names of these (policemen) so we could investigate them,” he said.—Marlon Ramos