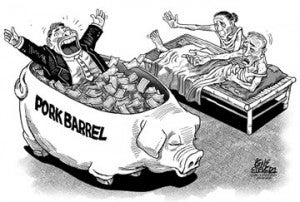 The Philippine Daily Inquirer special report about the P10 billion scam involving the misuse of pork barrels of senators and congressmen and the Malampaya funds is revolting.

While complaints of the common tao about poor public services are met by excuses that there is not enough funds be it for health, social welfare, education and even national defense, the expose shows how some government officials and crafty individuals plunder the public coffers.

The country with its more than 7,000 islands and coastine of more than 30,000 kilometers needs a decent naval force to protect the national territory.

We have the weakest armed forces in the region where China bullies us with impunity with regular excursions in a 200 mile exclusive economic zone.

President Benigno Simeon Aquino III authorized the use of revenues from the country’s Malampaya oil fields partly for the modernization of the Armed Forces of the Philippines.

There are countless needs that P10 billion can meet to improves lives of poor and jobless Filipinos.

Thousands of Filipino children are packed like sardines in public schools because of lack of classrooms.

More than 7 million Filipinos are jobless according to the latest government data. Many Filipinos die or fall ill due to water-borne and other preventable diseases because of inadequate public health care. The list goes on and on. We can only wish the government has enough money to provided adequate social services.

For some elected officials to enrich themselves while majority of Filipinos remain dirt poor is unacceptable.

The systematic pocketing of bribes and pork barrel funds is not only grossly immoral, it is an act of treason.