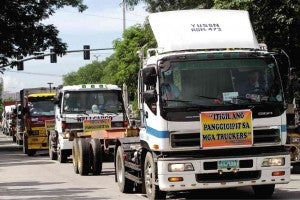 Trucking companies sent out a long protest caravan in Manila Thursday morning to oppose new weight limits on their daily cargo, regulations which the government said would help reduce damage on roads and save billions of pesos in repair costs.

Around 50 container trucks from members of Aduana Business Club Inc. blocked Roxas Boulevard near the office of the Department of Public Works and Highways (DPWH), causing traffic jams that earned them a stern warning from Manila Mayor Joseph Estrada.

The group is opposing the implementation of the new anti-overloading law or Republic Act 8794, which it described as “inconsistent, confusing and out of sync with international economic realities.”

It went ahead with the protest despite an announcement from the DPWH on Wednesday deferring the implementation of new trucking guidelines until Jan. 31 next year.

“We are asking the DPWH to reconsider because the implementation is not credible. They are using a portable weighing scale. Or why not approve the weight according to the ports?” said ABCI president Mary Zapata.

In a statement, the group also warned that the new regulations could become “another source of graft and extortion on our highways.”

Estrada arrived on Roxas Boulevard and invited the protesters to a dialogue, after the caravan caused bottlenecks that were felt in much of the city. “Their concerns involve national agencies. I promised that I will go out of my way to invite national officials so they could discuss the problem,” he said.

“But I gave them a warning. If they have complaints, don’t disturb the traffic flow. They will have to follow the local traffic laws. If this happens again, I will have them arrested,” the mayor and former president said.

ABCI maintained that if the law was meant to protect roads from damage, it presented no clear basis for “a standard tolerable weight” for trucks.

It recalled that because the new load limits were earlier deemed “unclear, inconsistent and unrealistic vis-à-vis international standards,” its enforcement was deferred during the administrations of former presidents Estrada and Gloria Macapagal-Arroyo.

“But until now, no such rationalization or action had been taken. What happened instead is that the DPWH, ostensibly concerned about the fast deterioration of substandard roads, called for the immediate enforcement of the load limits,” the group said.

Earlier this month, Agriculture Assistant Secretary Dante Delima said he had met with industry stakeholders who claimed that the price of agricultural commodities, particularly rice, could go up by P1 per kilo because of the new guidelines.

Under the new load limits, for example, a 22-wheel truck previously allowed to carry 700-800 sacks of rice per trip would now be limited to only 480-530 sacks per trip.

Delima conceded that the new guidelines could result in higher freight, handling and storage costs. “There may not even be enough trailers and containers to move all the cargo because of the additional trips required,” the official added.

According to the party-list group LPG Marketers’ Association, a producer or manufacturer that used to move products in just four trips a day would now need a fifth trip to deliver the same volume of cargo.

Read Next
Did you know: PAO criminal cases
EDITORS' PICK
Disease expert: Omicron variant may behave like Delta
Palace: Malls, establishments may require customers to use of face shields
This new condo in the South will make you want to turn a new leaf
Smart offers wireless fiber-like speeds to Filipino homes with country’s first 5G Prepaid Home WiFi
Syringes for Pfizer vaccine arriving on December 2 — NVOC chairperson
Legarda: Ending Violence Against Women, a cause for all
MOST READ
Bongbong Marcos to face another disqualification case
Christine Bersola, Julius Babao cleared of cancer after colonoscopy, endoscopy
Former PM Abe says Japan, US could not stand by if China attacked Taiwan
Tropical storm intensifies as it approaches PAR
Don't miss out on the latest news and information.