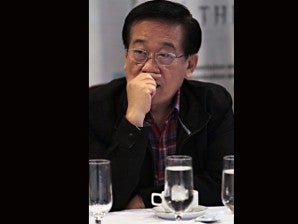 MANILA, Philippines—Election lawyer Romulo on Thursday dropped the complaint he filed against two restaurants who refused to grant him and his wife senior citizens discounts.

The lawyer decided to withdrew the complaint after Wilma Dy of Black Canyon and Marla Moran of Café Mediterranean apologized for not giving them the benefits for senior citizens for their failure to present their senior citizens ID.

“I felt the sincerity of their apologies and I believed them when they said that they were not fully aware of the provisions of RA 9994 or the Expanded Senior Citizens Act which allows the use of other identification cards like driver’s license, voter’s ID, SSS, GSIS, and other government issued identification documents, if the senior citizen could not present his Senior Citizens card issued by the Office of the Senior Citizens Affairs Office, to avail of the privileges under the law,” Macalintal said.

At the same time, Macalintal has asked Malacañang to allot three to five minutes of President Benigno Aquino III’s State of the Nation’s Address (SONA) to include the vision and mission of his administration for senior citizens.

“The President may consider reporting to the nation the effectiveness of the programs of the Department of Social Welfare and Development whose Secretary is the Chairman of the National Coordinating and Monitoring Board (NCMB) and the Office of the Senior Citizens Affairs of local government units to insure that senior citizens receive or are extended the benefits and privileges provided for by law,” Macalintal said. He made the request through Executive Secretary Paquito Ochoa.