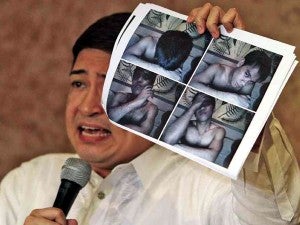 The two lawyers of Janet Lim-Napoles claimed on Wednesday that the National Bureau of Investigation may have been unwittingly used to “save face” after the “fake” rescue  by its agents of Benhur Luy, principal whistle-blower in the alleged P10-billion scam.

The camp of Napoles is considering slapping libel charges against Luy and his family and the Inquirer for claiming she masterminded the scam involving pork barrel funds of lawmakers over the past 10 years.

“We don’t know if we will file a case against the Inquirer or the whistle-blowers,” Bruce Rivera, lawyer of Napoles, told reporters.

At this point, he said, the legal team was “still trying to explore the legal options available against of course all of the people involved who may have done something.”

Rivera, along with Alfredo Villamor, lawyer of Napoles’ brother Reynald “Jojo” Lim, held a news conference on Wednesday to turn the tables on Luy.

They said the Luy family’s vilification of their client was born out of their lost bid to have the siblings Napoles and Lim charged with the serious illegal detention of Luy for three months starting last December.

Rivera read a statement from Napoles in which she slammed the Inquirer for “vilifying” and “demonizing” her as she took exception to Wednesday’s banner headline where she had allegedly said she controlled the government.

“I wish this were true for if I really have the government in my hands, then the NBI would not have arrested my brother and charged with a criminal case since I would just tell Secretary (Leila) de Lima to back off,” Napoles said.

She denied she had misused the pork barrel funds of lawmakers through fake nongovernment organizations, saying she was a businesswoman with legitimate businesses.

Napoles described Luy as a “trusted relative” who used to do errands for her until December last year when she claimed he stole P300,000 that he was supposed to deposit in her bank account.

Her lawyers furnished reporters a copy of a June 25 resolution of the Pasig City Prosecutor’s Office charging Luy with qualified theft.

She also alleged that Luy had taken out a P5.5-million loan from Air Materiel Wing Savings and Loan Association Inc. without her authorization.

Napoles denied that she had detained Luy. She said Luy actually had gone on a spiritual retreat “to reform himself,” saying that he was “by his own admission a habitual user of the illegal drug ecstasy,” and had “gender confusion and sexual indiscretion issues.”

Napoles said the illegal detention case and the allegations of her being the brains behind the pork barrel scam were hatched by the Luys and their lawyer, Levito Baligod, so they could blackmail her.

Napoles said her lawyer Villamor met with Baligod who allegedly demanded initially P38 million in exchange for dropping the serious illegal detention case against her and her brother, later raising this to P300 million.

“On top of the P300 million, Attorney Baligod also demanded I facilitate the issuance of Canadian visas for the Luy family plus pocket money amounting to $1.5 million and the setting up of a pharmacy that will serve as the business of the youngest Luy sibling who is not going to Canada,” Napoles said.

“It is clear that extortion and blackmail are the motives behind the series of articles, which appeared in the Inquirer and was no doubt fed by unidentified NBI agents who are wittingly being used by Attorney Baligod and the Luy family for their own selfish needs,” she said.

At the news conference, Rivera said that Napoles was “ready to face any investigation” but lamented that she was being “targeted in the bar of public opinion without proof.”

The lawyer also dismissed as “statements which are without evidence, record or proof” the affidavits issued to the NBI against Napoles. “It’s unfair that (the statements) were taken as gospel truth,” Rivera said.

Villamor said the charges against Napoles only came out after the state prosecutor threw out the serious illegal detention case against her and Lim.

He quoted a portion of the June 10 resolution of Assistant State Prosecutor Juan Pedro Navera that stated Luy’s letter to Napoles apologizing for an offense he committed against her did not indicate he was illegally detained.