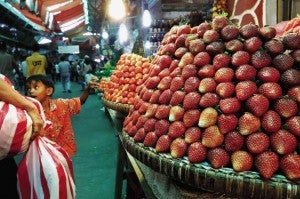 STRAWBERRY stands mean one is in the Baguio public market. The Baguio government has asked its developer, Uniwide, if it intends to pursue a lease development contract to improve the market, which has been stalled by litigation for 18 years. EV ESPIRITU/INQUIRER NORTHERN LUZON

BAGUIO CITY—The Baguio government has required the Uniwide Sales Realty and Resources Corp. to declare whether it intends to pursue the development of the city’s public market, Mayor Mauricio Domogan said on Monday.

Domogan said the Securities and Exchange Commission (SEC) directed the firm in May to dissolve and liquidate its assets because of insolvency, but it should not include its 1995 lease development contract over the Baguio market among those assets.

In a disclosure to the Philippine Stock Exchange, Uniwide declared that it is disputing the SEC order.

Domogan said companies that have ongoing transactions with the Baguio government are not allowed to use lease contracts as mortgage collateral nor could they sell these contracts to other firms.

“You cannot stop them from partnering with another company [to fulfill the contract], which is likely,” he said.

The lease contract is silent on whether Uniwide may enter a joint venture deal in order to complete the development contract, documents showed.

The Uniwide project has been frozen for 18 years due to a 1995 lawsuit, which market vendors filed to challenge the constitutionality of the design, build and lease (DBL) formula that the city government had used in bidding out one of Baguio’s oldest and most valuable pieces of property.

A regional trial court (RTC) here ruled in 2008 that the DBL contract was valid. The Court of Appeals affirmed the Baguio RTC decision in December 2012.

Uniwide may proceed, Domogan said, but only after it agrees to review the terms and references for the project and the 1995 master plan for a P1.7-billion, seven-story facility at the market’s hill top, and a flyover linking the hill top to a side street of downtown Baguio.

“Even when Uniwide says it is interested to continue with the contract, with the passage of time, I hope they are willing to review the plans and specifications and see how we can improve it,” he said.

Domogan said the new plans must benefit the city, as well as market vendors who are entitled to stalls on the first floor of the proposed commercial complex. Vincent Cabreza, Inquirer Northern Luzon