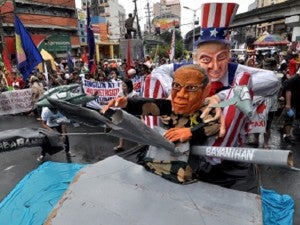 Militants staging a protest near Malacañang Palace in Manila during their “Lakbayan” last year. INQUIRER FILE PHOTO/RICHARD A. REYES

MANILA—Militant groups vowed Wednesday to push through with rallies near Congress when President Aquino delivers his State of the Nation Address on July 22 despite being denied a rally permit by the Quezon City government.

In separate letters to Bagong Alyansang Makabayan (Bayan), the National Union of Peoples’ Lawyers (NUPL) and the Freedom from Debt Coalition (FDC), the city’s Department of Public Order and Safety cited possible traffic jams as the reason for denying the request.

Bayan, through NUPL, its legal counsel, had asked Mayor Herbert Bautista for a permit to hold a rally from 7 a.m. to 6 p.m. on July 22 on Batasan Road, near the House of Representatives where Mr. Aquino is to deliver his SONA.

The FDC had asked permission to conduct its rally in front of the Ever Gotesco mall on Commonwealth Avenue.

“The said area is not the proper venue of the activity as it may cause a serious traffic problem,” Elmo San Diego, the department’s head, said in his July 16 letters to the groups.

In the case of FDC’s request, the city government also cited “sanitation” concerns in denying the request.

San Diego also said in an interview on Wednesday that parts of Batasan Road and Commonwealth Avenue had been declared “no rally zones.”

The city government suggested a football field at the Quezon City Hall compound, which is several kilometers away from the House of Representatives, as an alternative venue for rallies.

“It’s a designated freedom park, so there’s no need to apply for a rally permit,” San Diego told the Inquirer.

In past years, militant groups usually held their SONA street protests along Commonwealth Avenue near the Ever Gotesco mall, with policemen blocking roads to the House of Representatives.

NUPL national secretary general Edre Olalia said he was “dismayed and frustrated” by the denial of their request.

“It is silly for the police to invoke traffic when it is manifestly evident every single year that it is the police blockade that causes it,” Olalia told the Inquirer, adding that traffic jams can “never override the right of people to assemble.”

For his part, Bayan secretary general Renato Reyes Jr. said the organizers of the SONA street protests were determined to push through with their plans.

Reyes claimed that under the law, an application for a rally permit may be denied “if the approving authority can prove that the protest poses a clear and present danger to public safety and public health.”

“The denial does not bear any proof that the protest poses a clear and present danger to the public… The police keeps on branding the protesters as possible threats but have not provided any proof to support this assertion,” he added.

“The Aquino government only wants to hear the applause and cheers from its allies in Congress. It does not want to face the reality of public dissatisfaction and indignation. It fears criticism. So much so for Aquino’s claims of change. This government is doing exactly what Gloria (Macapagal-Arroyo) did during her regime,” he added.