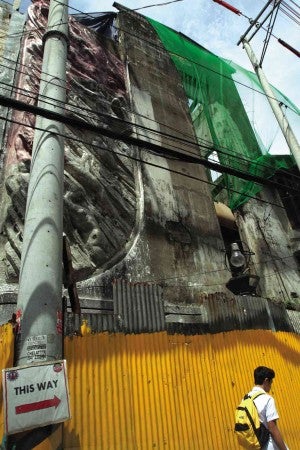 “THE FURIES” or what’s left of it (left) is losing its place of prominence in a city that apparently needs a refresher course on art appreciation, where officials even allowed an electric post to ruin the view on San Marcelino Street, Ermita, Manila. NIÑO JESUS ORBETA

The city government of Manila has temporarily suspended the demolition of the old Meralco building in Ermita after the Italian Embassy wrote regarding the fate of the artwork on the structure’s facade, a 9.5-meter bas-relief by Italian sculptor Francesco Riccardo Monti.

“I had (the demolition) stopped,” Manila Mayor and former President Joseph Estrada told the INQUIRER, adding that an embassy representative met with him early last week.

Juan Capuchino, the newly appointed city building official, said the Italian Embassy’s concern was settled “on one condition, that they will have to inspect and approve the replica of the sculpture” before the demolition could continue.

But Estrada explained that “it’s private property now so they have no choice but to have (the sculpture) transferred,” referring to the property on San Marcelino Street, which had been bought by Wilson Cham, president and general manager of Greenville Realty Development Corp.

The building had been condemned by the city government. A McDonald’s fast-food outlet is reportedly set to rise in its place.

Monti lived in the Philippines from 1930 until his death in 1958. He had worked with local architects and sculptors on major projects commissioned by the government and private individuals.

The sculptor worked with architect Juan Arellano on the old Meralco building featuring his work, “The Furies.”

The concrete sculpture, which had survived a fire, is now deemed brittle and might crumble should there be an attempt to move it.  A mold was made two weeks ago to create a replica which would be installed at Adamson University also in Manila.

The remnants of the original sculpture would be kept by the National Historical Commission of the Philippines.

Monti’s granddaughter, Anna Filippicci Bonetti, also wrote the Heritage Conservation Society to express her “desire for the sculpture to be saved.”

Bonetti noted that Monti was buried in the cemetery of San Felipe Neri parish in Mandaluyong City because he wanted “to be laid to rest in the country that had given him confidence, glory and a lot of satisfaction in the art of sculpture.”

Read Next
Mali may have 2 companions as Estrada eyes Manila Zoo rehab
EDITORS' PICK
DOH: 28,471 new COVID-19 cases in PH; active cases now 284,458
On Day 2 of implementation, gov’t says workers now exempt from ‘no vax, no ride’ policy
Over 3 Million worth of prizes to be won at Smart Padala’s SENDali Manalo Promo!
Acer starts the year off strong with the Aspire Vero National Geographic Edition
Metro Manila posts lowest temperature yet this ‘amihan’ season at 19°C
Gear up and get ready to play with Yamaha Mio Gear
MOST READ
Lucky plants to grow in 2022
Derek Ramsay on being married to Ellen Adarna: ‘Gumaan ‘yung mundo ko’
Cristalle Belo on raising her kids in Australia: ‘We set limits’
Unvaccinated has rights but also has limits—DOJ
Don't miss out on the latest news and information.