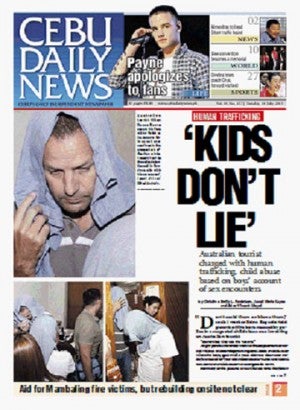 “Remember, they are the victims.”

Angry parents yesterday went to the Department of Social Welfare and Development regional office in Cebu City where the boys, aged 9 to 14 years old were taken after Friday’s arrest of 45-year-old Hilton Reece Munro and a local taxi driver in Stakili Resort in Compostela town.

For many of the parents it was the first time they knew that their sons were spending time with a foreigner, who allegedly took nude pictures and had sexual relations with the minors.

Some mothers burst into tears. One angry father wanted to confront the Australian, who remains in police custody. The shocked parents had to be briefed by the social worker before being allowed to meet their children, who feared they would be scolded and punished.

According to Regudo, the eldest boy was the one who persuaded the other kids, his neighbors, to meet up with the foreigner in his room in the beach resort.

The 14-year-old boy related to authorities that Munro had known him since he was 12 years old, after a friend had introduced them.

The boy said he was paid P500 to P1,000 for each sexual encounter with Munro.

“Duwa duwa lang ang ila; lingaw lingaw lang,” said the social worker, (For them they were just playing around, having fun.).

She said she was convinced the boys were telling the truth: “Children that age don’t lie about that.”

The boys, all from Mandaue City, will have to miss classes and stay for an indefinite time in the government office for psychological debriefing while the parents will undergo “parenting” sessions.

Munro, a resident of Shepherd Street in Hongkong and taxi driver Gilbert Andrada, 41, covered their faces with T-shirts when they were brought by police to the Palace of Justice yesterday for a closed-door inquest proceeding.

Police filed charges of human trafficking and child abuse, special laws that are non-bailable if the prosecutors find strong evidence against the suspects.

They were charged with violation of Republic Act 9208 or the Anti-Trafficking in Persons Act of 2003 and Republic Act 7610 or the Special Protection of Children Against Abuse, Exploitation and Discrimination Act.

Their lawyer Leilani Villarino, who advised her clients to cover their faces, told reporters they would respond to the charges in due time.

“I have not read the documents yet. I could not say what would be our defense as of now. But this thing is for sure. We will file a counter-affidavit,” she told reporters.

Asst. Provincial Prosecutor Dionilo Mantos said he would resolve the case in 15 days.

A check with the immigration office showed that Munro has been coming to Cebu as a tourist for brief visits since 2011.

He would usually stay for 21 days, without seeking an extension, said Casimiro Madarang III, alien control officer of the Bureau of Immigration.

“Based on his travel records, he never overstayed, not even for one or two days,” said Madarang, who added that Munro would visit Cebu every other month or every two months.

Munro arrived on July 5 and was scheduled to leave the country on July 26. Initial reports said he went to various resorts in Cebu province accompanied by a woman described as his wife, but this could not be confirmed in the immigration office.

Australians can visit the Philippines without applying for a visa under an executive order issued by former president Gloria Macapagal-Arroyo, which aims to encourage more tourists to visit the country, explained Madarang.

Munro and the taxi driver were arrested by members of the PNP Regional Anti-Human Trafficking Task force headed by Insp. Sheryl Bautista together with the DSWD and International Justice Mission.

The arrest took place about 10:30 p.m. in Munro’s rented room at the beach resort where the boys and taxi driver, who ferried the children, were also found.

At the DSWD office, the parents who showed up were engaged in small businesses like sari-sari stores, or driving jeepneys. One father was a traffic enforcer.

They were furious at the Australian after the briefing and vowed to file a case against him and the taxi driver.

Some parents said they were alarmed when at dusk last Friday, their children who they thought were playing outside their houses didn’t come home for dinner.

“I kept looking for my son since 5 p.m. last Friday because we usually have family dinner at 6 p.m.,” one parent said.

“If my husband would know about this,” said one mother, “I don’t know what he would do to that foreigner.”

DSWD staff relied on the parents to vouch for the ages of their sons and no longer had the children undergo dental examination.

“Anyway, we will have supporting documents later that could verify their ages. Children as young as 9 and 10 don’t tell lies.”

Regudo said the 14-year-old boy had been recruited by a friend of his two years ago.

According to the boy, Munro would contact him each time he arrived from Australia. The teenager then convinced his friends in the neighborhood to visit the foreigner as well because the Australian was “no longer contented with him”.

Regudo said social workers have to visit the households of the five boys to verify the home situation of the children, especially the role of the parents.

She said the boys also have to be “processed” and undergo psychosocial examination since their experience could result in “two extreme tendencies” – they could seek out more lewd acts and victimize other children, or end up repelled by any sexual activity in the future.

“We need to talk to the parents first so that the children feel safe and secure. We need to advise them how to handle their children,” Regudo said.

“Parents have to undergo parenting sessions,” she said, and monitor their children carefully.

Social workers will also have to check with the boys’ schools so that they are not made the targets of bullying.