A crash course for Congress neophytes 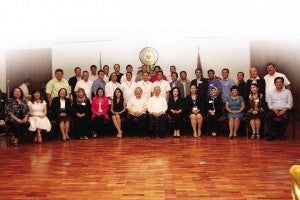 FRESHMEN members of the House of Representatives who took the second cycle of the Executive Course on Legislation organized jointly by the Congress and UP NCPAG do a “Class Act” with (seated, 7th) House Speaker Sonny Belmonte and (next to him) UP president Alfredo Pascual.

Where’s the pork? For those of us who think that was the first question the newly elected congressmen must have asked when they first stepped into Batasang Pambansa, here’s an astonishing bit of news: Some of the newbies asked instead where they could go for a crash course on the legislature.

The Center for Policy and Executive Development (CPED) has twice conducted the Executive Course on Legislation (ECL) for new members of the House of Representatives, 16th Congress. The first batch in June had 30 participants and the second this month, 49—a total of 79 out of 86 rookie representatives. CPED and the Batasan’s Office of the Secretary General jointly designed and managed the course.

At the University of the Philippines National College of Public Administration and Governance (UP NCPAG) in Diliman, CPED is the unit concerned with giving national officials, including senators and representatives, what it calls “capacity building programs.” The other unit, the Center for Local and Regional Governance, holds training programs for local officials—governors, mayors and the like.

When the media carried Sen. Miriam Defensor-Santiago’s brilliant advice to newly elected officials to go back to school, NCPAG received a flood of calls, according to CPED development officer Maynard V. Matammu. Consequently, the college conducted training programs for hundreds of local government officials and the new members of both houses, he said.

In previous years, newly elected legislators had enrolled individually at CPED and paid on their own to get working knowledge of their new roles, perhaps mainly to avoid looking and feeling like dummies in the hallowed halls of Congress. Who knows? Some of them might have actually taken the course to find out how they could best serve their constituents.

This time, the House collaborated with UP NCPAG on what to teach and who to do the teaching to best orient the neophytes. It went so far as to spring for the cost of training.

OK, so we paid the bill. Yes, us taxpayers who groan and gripe about the dismally low IQ of political candidates but just stand aside when they are elected to office. Which would we rather do? Watch them fool around and run the country aground or pay for adult education and hope for some kind of enlightenment?

The crash course covered what the first-timers needed to know to be able to perform their roles as lawmakers, help their districts progress and work with their peers, with other government agencies, with civil society, with international organizations and with their constituents.

There were, of course, presentations and discussions on their roles, responsibilities and challenges as representatives of legislative districts. The freshmen were taught how to negotiate the whole parliamentary maze—the procedures, house rules and requirements for running a legislator’s office effectively, as well as the significance and use of various legislative documents.

Also packed into the three days were an overview of the roles of the executive, legislative and judicial branches in national policy making; the governance challenges in an administrative system and the role of legislators in addressing such challenges; the state of the economy, specifically in the context of the Philippine Development Plan of the current administration; and the role of Congress in the national budget process.

Outgoing Albay Rep. Edcel C. Lagman spoke on the controversial and much maligned Priority Development Assistance Fund (PDAF), aka pork barrel. His son, Edcel Jr., who has been elected to the seat, was in the second ECL batch. 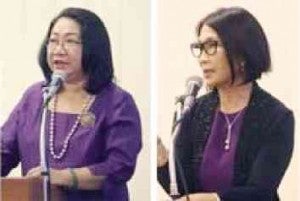 Each member of Congress is allotted P70 million of PDAF a year for underwriting district projects. Lagman told the newcomers that “the selection and financing of priority development projects and programs are attributes of, and integral to, lawmaking,” but the PDAF was neither a discretionary fund nor a personal fund of members of Congress.

For now, all we can do is wait to see if those who will soon get their hands on some PDAF will heed Lagman’s advice, practice transparency and use the pork barrel to bring meaningful change to the lot of their constituents. Or, will they get greedy like those reportedly embroiled in the current Napoles scandal?

While the pork barrel elicited lively discussion, another topic that must have been as interesting not only to the participants but also to the folks from UP is the national budget. Legislators spend an awful lot of time on hearings and deliberations relating to the budget, and the university is always at the mercy of the whole process.

“Since the UP experts had you guys captive for three days, did they hit you for more money?” we asked Cavite First District Rep. John Gerald Abaya at the dinner hosted last week by UP president Alfredo Pascual for the second ECL takers.

Being the smart man that he is, Pascual took the opportunity during dinner to remind the lawmakers that UP needs to modernize its facilities, intensify faculty and research development, and internationalize its faculty and students. He thanked the representatives for the continuing use of their PDAF for infrastructure improvements, scholarship grants, athletic training and other projects for the UP campuses.

To be fair, Pascual did not just ask Congress for support with a budget “that can make UP a great university in the 21st century.”  He offered the university as a resource for the legislators in identifying key concerns, regularly updating them on the state of the nation, providing expertise where more intensive policy briefings are needed and even creating websites to enable them to use the new media for their legislative work.

House Speaker Feliciano “Sonny” Belmonte Jr., in response, acknowledged that “all of us have a stake in our national university.”  The legislators needed the academe and the experts of UP, he said, to put perspective on their work and to tell them what more they could do.

Belmonte, who challenged his new colleagues to exceed the performance of what he deemed was an exceptional 15th Congress, commended the executive course, the very first partnership between the Lower House and the university.

“Without question, from amongst you new leaders will emerge,” he told the new kids on the block.

He called the crash course a rewarding experience for the legislators, as well it should be.

Matammu said NCPAG, in addition to its regular academic offerings for master’s and doctorate studies, can tailor training programs for the newly elected national and local officials and their staff to suit their needs.

PHOTOS COURTESY OF THE HOUSE OF REPRESENTATIVES