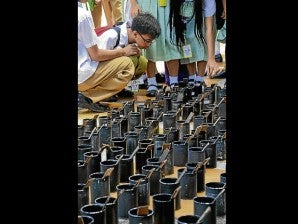 It may look like an ordinary black tumbler half filled with water containing pellets, with a strip of lawanit dipped into it. But make no mistake. It is a deadly tumbler—deadly for the eggs and larvae of dengue-carrying mosquitoes.

As dengue continues to down children across the country, the government is set to distribute—for free—more than 81,000 such traps to schools in dengue hotspots in Metro Manila and Northern Luzon provinces.

The government has also partnered with top biotechnology research institutions to look at boosting the effects of the antidengue trap and the possible dengue-fighting properties of plants like tawa-tawa, garlic, sweet potato, papaya, turmeric, ampalaya, oregano and lemon grass.

The Department of Science and Technology (DOST) and the Department of Education will disseminate next week 34,910 kits of the ovicidal/larvicidal (OL) trap to 482 public and private elementary and high schools in Metro Manila, including  Quezon City, and the cities of Caloocan, Pasay, Valenzuela, Manila, Muntinlupa and Pasig.

Another batch of 46,500 OL traps will be distributed, also for free, in schools in the provinces of Ilocos Sur, Benguet, La Union and Pangasinan within the month, officials said yesterday.

“We developed the pellet last year and it was proven effective in laboratory tests. We had a very successful field test that’s why we decided to roll out the pellet,” said Dr. Antonio Ligsay, chief of the Philippine Council for Health Research and Development, an agency under the DOST.

“The pellet attracts the mosquito then kills larvae, so there will be fewer adults,” Ligsay said.

“What’s important is that a single mosquito is enough to produce the disease.  If you trap 100 eggs, you prevent as many mosquitoes from producing the disease.”

Through the OL trap’s national roll-out, the government hopes to replicate the decrease in the population of dengue-carrying mosquitoes observed in hotspots last year, where the kit was first field tested.

The traps come in kits that include a black container, a strip of lawanit and nontoxic pellets formulated from pepper. Each kit costs P15.

The tumblers are black because mosquitoes are attracted to dark colors, officials said.

The DOST started formulating the pellet last year and has spent some P20 million in design, field-testing and distribution to pilot areas, Almanzor said.  Each pellet sachet costs P1.50.

Diluted in water, the pepper pellets are known to be effective for a week.

Ligsay said partner institutions, including the University of the Philippines and De La Salle University, are studying how to extend the pellet’s potency to at least 15 days and possibly up to a month.

He warned that simply crushing peppercorns,  available in public markets, will not kill  dengue-carrying mosquitoes.

To maximize its effect, the DOST OL trap is recommended to be placed in known breeding grounds of mosquitoes, such as plant pots, bathrooms, gutters and other places where water is known to collect, officials said.

The DOST’s facility in Bicutan, Taguig City, currently produces 50 kilos of the dengue-killing pellets per day but Almanzor said production capacity could be doubled to cope with the demand.

She said a private firm, Heritage Veterinary Corp., is also expected to “commercialize” production of the Philippine-patented pellets, with an expected output of 16 million sachets per month.

The sachets could become available at cost by September for nationwide distribution but still at current prices, she said.

The DOST said the OL trap has arrested the rise of dengue in its pilot areas, among them barangays in the Cagayan Valley and Eastern Visayas. Neighborhoods that reported more than 200 cases in 2010 had zero-dengue incidence this year, officials said.

In its pilot phase, the government distributed 14,000 OL traps to neighborhoods identified by the health department as dengue hotspots.

Ligsay  said the government was also developing a “rapid testing” method for early detection of dengue among patients with fever.

A university in the United States is also working with the DOST to design a “predictive model” that could forecast a possible rise in dengue-carrying mosquitoes depending on changes in temperature and rainfall levels.

The dengue-carrying Aedes aegypti mosquito is known to thrive during the wet season.