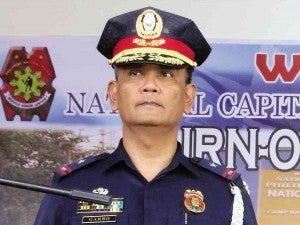 Metro Manila has a new police chief, a “drug-buster” who came all the way from Cebu province.

Garbo previously served as director of the Police Regional Office 7 in Central Visayas. He also had stints as NCRPO chief of Regional Operations Division and as deputy director for operations of the Philippine National Police (PNP).

Garbo is known as a “veteran drug-buster,” according to an NCRPO statement.

“Our plans should be simple and responsive, measurable, attainable and should be realistic to the issues that we have recognized to address. We will enhance our crime database, the e-rogues gallery, the e-warrant (system), and we will make full use of our investigative capability,” Garbo said in a speech.

Speaking to reporters, Garbo said an “immediate challenge” for the NCRPO would be the security measures for the upcoming State of the Nation Address (Sona) of President Aquino at the Batasan complex on July 22.

Purisima said Garbo’s mission would be to keep the momentum gained by the PNP in protecting the capital’s 18 million residents.

Espina was earlier appointed chief of the PNP Directorial Staff, the fourth highest position in the force, after his 317-day tour of duty in the NCRPO. Jaymee T. Gamil