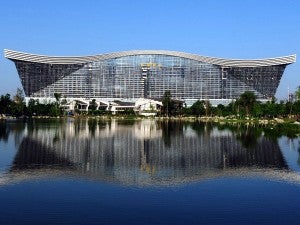 CHINA, Chengdu: This picture taken on May 26, 2013 shows the “New Century Global Centre” building reflected in an artificial lake in Chengdu, in southwest China’s Sichuan province. The center, claimed by Chinese officials as “the world’s largest standalone structure”, is going to be opened to the public on June 28. The 100m high “New Century Global Centre” is a symbol of the spread of China’s boom: 500m long and 400m wide, with 1.7 million square metres of floor space – big enough to hold 20 Sydney Opera Houses, according to local authorities. AFP

BEIJING—Boasting its own artificial sun and a floor area three times that of the Pentagon, the “world’s largest building” has opened in southwest China to mixed reviews from its first visitors.

But the first wave of visitors were divided over the attractions of the structure, which houses 400,000 square meters of shopping space, offices, conference rooms, a university complex, two commercial centers, two five star hotels, and an IMAX cinema.

“It lacks creativity,” said one visitor on Sina Weibo, China’s version of Twitter.

Another visitor poked fun at its name.

“Why is everything in Chengdu called ‘global’,” the poster said.

However, some Internet users were impressed with the complex, which opened on June 28.

“It will become the new landmark of Chengdu,” said one poster.

The Global Centre has a marine theme, with fountains, a huge water park and an artificial beach, accented by the undulating roof, meant to resemble a wave.

The centerpiece is a 5,000 square meter artificial beach, which includes a rafting course and a “seafront” promenade, complete with parasols and seafood outlets that can accommodate 6,000 people.