7 dead as fighting rages in Mindanao 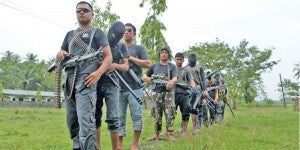 “Firefight ensued for about 15 minutes and the perpetrators scampered in different directions,” Hermoso said.

Two soldiers were wounded in the initial volley, but the army gave chase to the retreating members of the Bangsamoro Islamic Freedom Fighters (BIFF) and killed five of them, he said in a written report.

The earlier fighting had left five soldiers and three gunmen dead and sparked fears that it would affect the peace talks.

The military however ended its pursuit of the renegade rebel force before the talks resumed in Malaysia on Monday.

The peace talks aim to create an autonomous region for the Muslim minority in Mindanao, the southern third of the mainly Catholic nation of 100 million.

The two sides signed a preliminary deal in October outlining the broad terms for a peace treaty that would be signed by 2016.

The Kuala Lumpur talks aim to spell out revenue-sharing terms with the national government in the self-rule area.

The talks were continuing on Saturday, President Benigno Aquino’s spokeswoman Abigail Valte said in an interview on government radio.