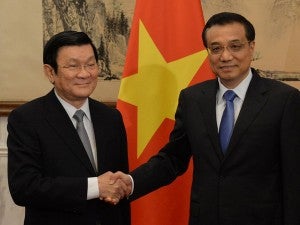 WASHINGTON—President Barack Obama has invited his Vietnamese counterpart to visit the United States this month, sources said Wednesday, looking to boost cooperation on security and trade despite concerns over the communist state’s rights record.

President Truong Tan Sang’s visit would be only the second by a Vietnamese head of state to Washington since the former war adversaries normalized relations and comes as both governments see growing common interests.

Two people familiar with the trip plans, who were not allowed to be quoted by name, told AFP that Obama has invited Sang to the White House during the last week of July.

Vietnam has been eager to expand military cooperation with the United States as Southeast Asian nations accuse a rising China of increasingly aggressive tactics to exert territorial disputes.

While tensions remain high between China and the Philippines, friction has appeared to ease between Beijing and Hanoi in the run-up to Obama’s decision to invite Sang.

But the growing US relationship with Vietnam has faced sustained criticism on Capitol Hill, which accuse the administration of paying only lip service to calls on Vietnam to improve human rights.

Representative Frank Wolf, a Republican from Virginia, charged that the Obama administration has been “incredibly weak” in promoting human rights in Vietnam and elsewhere.

“If you voted for Obama and you thought that he was going to be an advocate for human rights and religious freedom in Vietnam, you have been cheated,” Wolf told AFP.

“He is the worst president we have ever had on this issue,” he said.

Administration officials who testified before Congress last month said that Vietnam’s human rights record was deteriorating, with the country holding more than 120 political prisoners and stepping up curbs on the Internet.

The stance of Congress comes in part because of appeals from Vietnamese American constituents, many of whom fled communist rule.

Southeast Asia a priority for Obama

Obama has made Southeast Asia a priority, seeing an opportunity to build relations with a region that has posted high economic growth rates and is mostly friendly to the United States.

Since the start of his second term, Obama has met at the White House with the leaders of Singapore, Brunei and—in a visit that would have been unthinkable before recent democratic reforms—Myanmar.

The United States has also been expanding commercial relations with Vietnam, which is one of a dozen nations negotiating the US-backed Trans-Pacific Partnership.

The Obama administration has envisioned the pact as the basis for a new order, which would set rules for the Asia-Pacific region at a time of rapid change marked by China’s rise.

Presidents Bill Clinton normalized relations with Vietnam and paid a landmark visit of reconciliation in 2000. President George W. Bush also visited in 2007 for an Asia-Pacific summit.

The only previous Vietnamese president since the war to visit the White House was Nguyen Minh Triet in 2007 at Bush’s invitation. Protesters trailed his six-day US visit.

Secretary of State John Kerry, a Vietnam veteran who was active in normalization of relations, has said that he plans to visit Hanoi soon.—Shaun Tandon