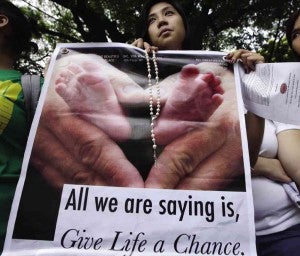 “We ask the Holy Spirit to enlighten and inspire the lawyers who would be arguing our position.”

In his homily during the Mass offered for the lawyers before they went to the Supreme Court at the opening of the hearing on the constitutionality of the reproductive health (RH) law, Antipolo Bishop Gabriel Reyes also prayed that the justices would be enlightened to render judgment “according to the truth.”

“There are many things in the RH law that we are against, one of which is that the government is telling the mayors to distribute free contraceptives to our people. But using contraceptives is wrong, it is against the moral law and against the natural law,” Reyes said.

The Mass was held at Nuestra Señora de Guia Parish in Ermita, Manila, and was attended by several other bishops and anti-RH advocates.

“Our intention is not to dictate on the government how to govern,” said Reyes, chair of the Catholic Bishops’ Conference of the Philippines-Episcopal Commission Family and Life (CBCP-ECFL). “Our main concern is the spiritual life of our people and part of the spiritual life of the people is that they live according to moral laws.”

He warned that a government that excluded God in its governance and policies usually ended in disaster. “This RH law [and other bills], all these will be a long battle. Some will lose and some will win but prayer can influence destiny,” he said.

Reyes pointed out that the fertility rate in the country was declining, with Filipino women now having only three children each compared to the 1960s when they had at least seven each. “It is already decreasing without the RH law,” he said.

In an interview with reporters after the Mass, Fr. Melvin Castro, executive secretary of the CBCP-ECFL, said they were hopeful that the court would rule against the legality of the RH law based on the provisions of the Constitution.

“This is the last branch of the government we trust that would uphold the Constitution not even from the religious point of view but purely from the provisions of the Constitution, which is very clear in stating that the State would protect life from conception to natural death,” said Castro.

He also appealed to the government to learn from history, which he said was replete with examples of governance that crumbled because of its failure to protect life and family.

In Bacolod City, close to 1,000 people gathered in front of San Sebastian Cathedral on Monday night to pray that the court would rule against the RH law.

Some Catholic bishops on Tuesday said teenage pregnancies in the country may be up due to a false notion that using contraceptives such as condoms would protect them, pointing to a report of the National Statistics Office (NSO) showing that babies born to teenage mothers jumped by 4 percent in the last 10 years.

“Could it be the result of a false notion about the use of contraceptives and other devices?” Cebu Archbishop Jose Palma, the outgoing CBCP president, said in an interview with reporters on Tuesday.

“But as we said, it can also be the result of the [declining] morality of the nation,” Palma added, stressing that the reported rising cases of teenage pregnancy in the country should be an issue “that should concern all of us for we care for our young girls.”

Lipa Archbishop Ramon Arguelles said teenage pregnancy in the province was not as markedly on the rise as in Metro Manila.

“Most teens here are still protected by the family and their faith. Many engage in premarital sex because of the proliferation of pills, condoms and pornography but again, not as many as in the metropolis,” Arguelles said.—With reports from AFP and Carla Gomez, Inquirer Visayas