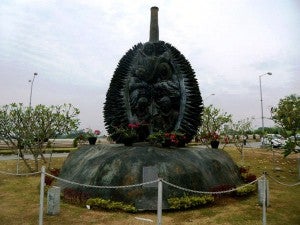 DAVAO CITY – With more than 10 years of successful drives against smoking to its credit, Davao City has been recognized anew by the Southeast Asia Tobacco Control Alliance (Seatca) as the first Southeast Asian metropolitan area to become smoke-free.

The “outstanding contribution to the tobacco control” award was given to city officials here at the launching of the Smoke-Free Cities Asean Network or SCAN on Monday, at the opening of the first regional workshop on smoke-free laws attended by representatives from eight Asean countries.

Bungon Ritthiphakdee, Seatca chair, told reporters no other city that deserved the award more than Davao because it is the only Asean city which is “completely smoke-free.”

“Other Asean cities also recognized Davao City as the leader in the newly-created SCAN since it is being looked up to by Asean communities as the model smoke-free city,” she said.

Ritthiphakdee said cities in other Asean member-countries already have existing anti-smoking laws but “there are still gaps in the enforcement of these laws.”

Ritthiphakdee said what was worth emulating in Davao’s campaign was that the “enforcement of its anti-smoking law improves year by year.”

She specifically cited the no-no policy on smoking in public places which other Asean cities want to study. “That is a very good example,” she added.

Last year, the city’s anti-smoking ordinance was expanded to include a ban on the use of electronic cigarettes in public areas.

Under the expanded ordinance, smoking in  public places, including public vehicles and sidewalks where smokers and non-smokers converge is now banned.

“Davao City is a city to emulate in may aspects, especially in its smoke-free efforts,” Ritthiphakdee said.