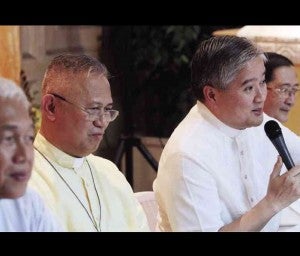 “We want to trouble consciences so every conscience listens to the voice of God,” said Villegas, Sin’s protégé who was elected president of the Catholic Bishops’ Conference of the Philippines (CBCP) on Sunday.

“You must understand and accept that the Church is not a lobby group. The Church is not an NGO. The mission of the Church is truly spiritual so if we get involved in bills like the reproductive health, which is now a law, it is because our spiritual mission mandates us to do that,” Villegas told reporters on Monday at the close of the bishops’ three-day annual plenary.

Groups challenging the law will have the floor first in the Supreme Court hearing on the measure, which mandates the state to provide the poor access to contraceptive devices in a bid to control the country’s runaway growth rate.

Tatad will make a five-minute opening statement. Pimentel will argue why the law violates the autonomy of local governments and the equal protection clause of the Constitution. Lawyers Ma. Concepcion Noche will discuss the right to life, Luistro Liban will tackle freedom of religion and Luis Gil Gana will touch on implications of the measure in Muslim Mindanao.

Villegas, the incumbent CBCP vice president who will take over from Cebu Archbishop Jose Palma in December, disclosed that some bishops and priests would observe the opening hearing in the high tribunal on the petitions seeking to nullify the RH law not as a lobby group but as moral leaders.

To show the Church’s support for anti-RH advocates, Villegas said a Mass and a prayer vigil would be held Tuesday at Nuestra Señora de Guia Parish in Ermita, Manila, to be led by Antipolo Bishop Gabriel Reyes.

The archbishop of Lingayen and Dagupan said that a blessing of the lay people who will argue the anti-RH position in the court would also be held following the Mass.

The people should expect the Church to always speak up, Villegas said, when the rights of men and women are endangered, human dignities are violated or when the family is attacked, the poor suffer unjustly or the children at risk or abused. 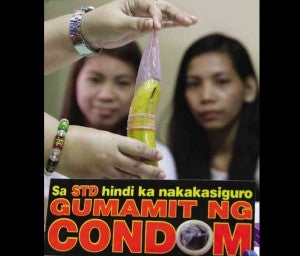 SHOW AND TELL A health worker uses a banana to demonstrate how to use a condom properly at a health center in Tandang Sora, Barangay (village) Culiat, Quezon City, on Monday. MARIANNE BERMUDEZ

Villegas said that the stand of the Catholic bishops was always to be in “critical collaboration” with the government, a kind of cooperation they have maintained even as early as the Marcos administration, although there were times they were more critical than collaborative and vice versa.

The Church will only be critical if it needs to be, he said, referring to the policy of Cardinal Sin, the late archbishop of Manila, during the martial law years under the dictator Ferdinand Marcos.

“When common good is served by the government, you can count on the bishops to be in full collaboration [but] when [it] is compromised or when moral norms are violated, human dignity compromised, family attacked and human life becomes cheap, then necessarily and understandably you expect the bishops to be more critical,” Villegas stressed.

Saying that the Church was sustaining its critical collaboration with the present administration, he said these things were not unique to the Philippines but was also happening worldwide.

This is the reason the Vatican has called on Christians across the world to ensure the protection of human dignity, he said.

“We are not a political group. We are neither the opposition nor administration. Our position is always the position of Christ,” Villegas added.

“So please respect our identity as a Church and it is consciences we appeal to and it is morality that we stand on. So I hope this clarifies the position of the CBCP with regard to the RH law with the Supreme Court,” he added.

The Church becomes critical depending on the issue and not because it liked or disliked those sitting in government, said Manila Auxilliary Bishop Broderick Pabillo, who appeared at the CBCP press conference along with Palma and Reyes.

“Our actions are guided not by what we like or what we don’t like but by social teachings of the Church,” Pabillo said.

No pass, no entry

Aware of the big interest in the suspended RH law, the Supreme Court is making sure it would be able to accommodate those who wish to listen to the oral arguments.

The court said it would strictly enforce a “no pass, no entry” policy in certain areas that it had designated for public viewing of the debates.

The oral arguments will be held in the main session hall, while monitors will be placed in three areas—the division hearing room and the main lobby, both in the main grounds, and the training room of the Centennial building.

The high court was supposed to hold the oral arguments on June 18 but reset it for Tuesday because it had acted on several other petitions for and against the law.

There are 15 petitions challenging the RH law while six intervenors are seeking to uphold its legality.