One step closer to linking academe and industry 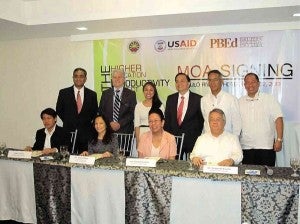 Trust CEOs, captains of industry and strong-willed leaders to get things done ASAP.

Early this year, the Philippine Business for Education (PBEd) invited top administrators of universities and colleges as well as business executives and industry leaders to a summit on higher education. Its objective was to link higher education with industry to solve the eternal problem of a mismatch between jobs in the market and the skills of graduates.

Apparently, PBEd went to work right away on the recommendations agreed upon at the summit, which included curriculum review and quality assurance.

According to PBEd president Chito Salazar, the linkup has moved forward rapidly because of the strong support from the industries.

Proof of this is the memorandum of agreement (MOA) that was signed last week between the Commission on Higher Education (CHEd), represented by Chair Patricia Licuanan, and PBEd, represented by chair Ramon del Rosario Jr.

The MOA involves a collaboration between CHEd and PBEd on the identification of competencies that will be expected from graduates of higher education institutions (HEIs) in four courses, namely, business management, information technology, tourism and hotel and restaurant management and electronics engineering.

These academic areas produce the workforce for what Del Rosario called sunrise industries important to the economy’s continued growth.

“The students of these four disciplines constituted at least half of the total national enrollment in recent years,” said Del Rosario. “Their improved relevance to industry, resulting from their redesign, would only mean greater employability for their graduates and a stronger workforce for associated industries.”

For its part, CHEd has been making a special effort to forge a partnership between the academe and industry, according to Licuanan.  All CHEd technical panels, for instance, have industry representatives. HEIs are also encouraged by the commission to get involved with industry through on-the-job training, apprenticeship and faculty immersion.

Still, as Licuanan herself cited, only 40 percent of the over 500,000 HEI graduates every year find employment one year after finishing college and 18 percent of the unemployed are college graduates (21.3 percent as of June 2013, according to the National Statistics Office).  She also said that, of the graduates who answered the want ads of Business Processing Association of the Philippines, only 5 to 8 percent were hired because the rest lacked the competencies required by the job.

Clearly, existing academe-industry tie-ups have yet to achieve the desired result of producing the manpower demanded by the vacancies out there. And here’s where the MOA will, hopefully, make a difference.

The PBEd-CHEd partnership entails not only a review of CHEd’s policies, standards and guidelines (PSGs) for the four specified disciplines but also the injection of new requirements “to ensure these PSGs are better aligned to the needs of the industries.”

“Genuine and sustainable reform requires nothing less than the participation of most, if not all, stakeholders,” Del Rosario said.

USAID, through the behest of mission director Gloria Steele, has been funding PBEd’s Higher Education and Productivity Project, of which the academe-industry linkage is a crucial goal.

Steele said that, upon her return to the country after being away for 30 years, she looked around for an organization working toward the improvement of Philippine education that USAID could support. “Education is key to making progress inclusive,” she said.

Hopefully, the partnership between CHEd and PBEd and the corresponding collaboration between the academe and industry can bring about the kind of education that, as Del Rosario put it, “will drive inclusive growth and development in our nation.”