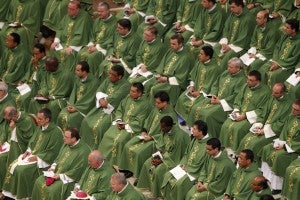 Seminarians and novices attend a Mass celebrated by Pope Francis, not pictured, in St. Peter’s Basilica at the Vatican, Sunday, July 7, 2013. The pope urged them to remember their vows of poverty, and told them he feels bad when he sees a priest or a nun with the latest car model. AP PHOTO/RICCARDO DE LUCA

VATICAN CITY—Pope Francis on Saturday said Catholics should not be afraid of renewing “old and flimsy structures” in the Catholic Church and urged future priests and nuns to buy “humble” cars and respect their vows of poverty.

“In Christian life and in Church life too there are old and flimsy structures. We need to renew them,” the pope said in his homily at a private Mass for Swiss Guards, Vatican radio reported on its website.

“We should not be afraid of allowing the flimsy structures that imprison us to fall down,” he said.

“The Church has always allowed itself to be renewed… That is how the Church has developed, leaving it to the Holy Spirit to renew these structures. We should not be afraid of this,” the pope was quoted as saying.

The pope later on Saturday addressed thousands of cheering trainee priests and nuns from around the world at a special audience in the Vatican in which he urged them to remember their vows of poverty.

“I feel bad when I see a priest or a nun with the latest car model. This cannot be!” he told them.

“Maybe you need a car to move around for work but get one that is more humble. If you like the nice one, just think how many children die of hunger,” he said.

“Wealth does a lot of harm. We priests and nuns need to be coherent about our poverty,” he said.

“I would like a more missionary Church, not so tranquil. A beautiful Church that moves forward.”

Francis, a moderate conservative elected by a conclave of cardinals in March, is planning a major overhaul of the Vatican bank and bureaucracy and has previously said he would like a “poor Church for the poor.”

He has launched an investigation into the Vatican bank and has ordered a group of top cardinals to propose ways of reforming the Vatican administration at a meeting planned for October.

The Vatican bank, the Institute for Works of Religion, is at the center of an Italian money-laundering probe but the Vatican has made efforts in recent years to bring it into line with international rules.

A series of leaks of confidential Vatican documents by then pope Benedict XVI’s butler last year exposed allegations of corruption and mismanagement in the Roman Curia, the central administration of the Church.