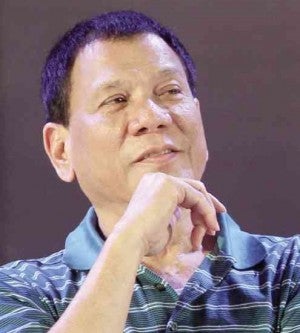 DAVAO CITY—The city’s police chief said he was one with Mayor Rodrigo Duterte who thinks criminals should be the ones dying and not police officers.

Duterte always says in public that lawlessness has no place in the city, and that they have two choices—leave vertically (reads voluntarily) or leave horizontally (in a coffin).

In recent days, policemen here have been suspected of deliberately killing suspected law offenders, particularly drug personalities during raids or arrests and pass them off as the result of legitimate shoot-outs.

Duterte had been unfazed by suspicions against the police and instead urged law enforcers to clamp down on illegal activities even if it meant deaths to offenders who would fight back.

Dela Rosa, whose term as Davao del Sur police director until 2012 was hounded by summary executions of suspected criminals, said he agreed with Duterte’s line of thinking that criminals have no place in the city.

“We support the mayor’s stand. Criminals should be the ones dying and not policemen. That is also the standing order from the PNP chief,” he said.

Dela Rosa said he did not mind criminals dying during arrests or raids.

“If a criminal wants to end his life, I encourage him to fight back,” he said, even as he admitted that policemen here, especially those belonging to the elite Special Weapons and Tactics Team (SWAT), needed more assault rifles and ammunition, along with state-of-the-art communication equipment and patrol cars, so it could effectively combat armed criminals.

Dela Rosa said that to further protect SWAT members, Kevlar-based armored vests, tear gas and other vital equipment that could aid police operations should also be provided them.

In Digos City in Davao del Sur, Gov. Claude Bautista also warned law offenders to reform or to leave the province in silence if they had not planned on changing their illegal ways.

Addressing criminals during a news conference here early this week, Bautista said he had clearly told the police to do anything to eradicate all forms of crimes, including illegal drug trade and gambling.

“I make their world as small as possible here in Davao del Sur,” he said.

Bautista also said he understood that Duterte’s tightened campaign against criminals would drive Davao City-based criminals into Davao del Sur.  He said he was warning possible “evacuees” that they had no place in the province either.

“I don’t welcome them here,” he said.

But Bautista, who has been rumored to maintain an army of vigilantes, would not say what fate actually awaits “hard-headed” criminals in Davao del Sur.

Responding to persistent questions on these rumors, Bautista admitted that a staff of his had been identified as a member of his supposed private army.

But the said staff actually works as his driver, he said.

“If they have evidence, they should tell the police for action,” Bautista said, adding that one of his marching orders to Davao del Sur police director Senior Supt. Ronaldo Llanera was to conduct a deeper investigation, not only of the rumors against him, but of other politicians said to be maintaining armed groups.

For his part, Llanera said they had so far confirmed that criminal gangs operate in the province but there had been no indication yet of private armed groups working for some political interests. Judy Quiros and Orlando Dinoy, Inquirer Mindanao