‘Mermaid’ Oposa, other speakers inspire youth to do something great for the country | Inquirer News
Close
menu
search

‘Mermaid’ Oposa, other speakers inspire youth to do something great for the country 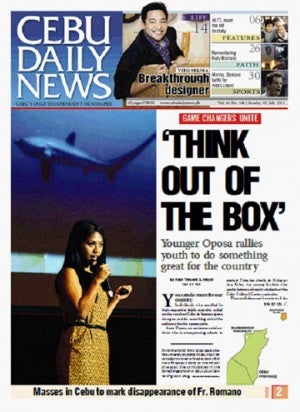 You can do more for the country.

At 25, Anna Oposa is leading a campaign to protect the Visayan sea and Thresher Sharks in Malapascua Island that make the northern Cebu island a popular dive spot.

“The youth is the future of our country. You don’t have to wait for tomorrow to do something great,” said the rescue diver and daughter of Cebuano environmental lawyer Antonio Oposa.

The young Oposa has organized dive guides, teachers, and children in Malapscua to protect Monad Shoal, a sunken island where Thresher Sharks gather, making it a habitat for shark species whose population in the world is dwindling due to overfishing for their fins and meat. The sharks do not attack humans.

She was one of four speakers in yesterday’s forum “Gamechangers” at the Cebu Cultural Center attended by students of various universities in Cebu.

Oposa, a Manila-based environmental activist spoke in the second of a series of forums organized by the office of Sen. Teofisto “TG” Guingona III to share “creative, unconventional, and innovative ideas” to solve the country’s problems.

Oposa shared her experiences as co-founder and “chief mermaid” of Save the Philippines Seas (SPS), a movement to conserve and preserve marine biodiversity by using the power of social media.

She was invited as one of the Global Shapers in the World Economic Forum in Davos, Switzerland and is also involved with the Climate Change Commission in crafting the Ecotown Development Framework in San Vicente, Palawan.

“I don’t claim to be an expert because the moment one claims to be an expert, there’s a possibility that he or she is no longer capable of learning,” said Oposa, who is also a writer and a teacher.

She said all Filipinos should learn how to swim since we live in an archipelago.Oposa showed a Powerpoint slide of a little girl dressed in a mermaid suit.

Another speaker, Delfin Villafuerte, valedictorian of last schoolyear’s graduating class of the Ateneo de Manila University, explained why he turned down offers to work in big companies so he can teach in public schools under the Teach for the Philippines program.

“We are fighting for quality education. If we are able to tranform our classrooms, we will be able to transform our students. I teach because I love the Philippines,” Villafuerte said.

He narrated his experiences with his young students in the public school and how he found fulfillment in being able to transform lives.

He was one of the winners in the search for the Ten Outstanding Students of the Philippines in the Metro Manila level .

Actor Dingdong Dantes, chairman of the YesPinoy Foundation, talked about how he and his friends started a scholarship for children of Philippine Marine soldiers who got killed in action.

The actor is also the Youth Ambassador for the Arts of the National Commission for Culture and the Arts and was recently awarded the Youth Leadership Achievement Award by the Department of Education.

Noel Cabangon, who is known for composing socially relevant songs such as “Kanlungan” and “Tatsulok”, sang during the intermission.

Other forums like this will be mounted in different parts of the country to spur the youth into action.

“We want (the young people) to get involved in nation-building through whatever it is that they are passionate about. We also want to encourage them to come up with more out-of-the-box forward-thinking ideas and solutions,” the organizers said.

“By sharing stories of other innovators, we hope that we will be able to give young people the courage to initiate their own game-changing projects.”