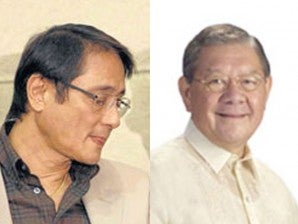 Speaker Feliciano Belmonte Jr. on Thursday urged Negros Occidental Rep. Ignacio “Iggy” Arroyo to testify in the Senate about the true ownership of the used helicopters passed off as brand new when they were sold to the Philippine National Police (PNP) in 2009.

Speaking at a press conference, Belmonte said it was “in his (Arroyo’s) best interest” if he went to the Senate and backed up his claim made through his lawyer that the choppers were leased by the Arroyo family corporation and were never owned by his brother, former first gentleman Jose Miguel “Mike” Arroyo.

Ignacio made the claim from London where he is reportedly seeking treatment for a liver ailment. Belmonte said he did not know when the congressman was returning to the country.

“If I were in his shoes, I’ll go there and convince the Senate that what I’m saying is true and is not just a ploy to take the heat off my brother or anything like that,” Belmonte said.

In a statement read recently by his lawyer, Andresito Fornier, Ignacio Arroyo said the five helicopters allegedly owned by his older brother, Mike, had been merely leased to the family’s LTA Inc. in 2004 for use in the campaign of then President Gloria Macapagal-Arroyo, Mike’s wife.

Fornier produced a copy of a lease signed by Ignacio and Renato Sia, an official of Lionair, the helicopter dealership that purportedly facilitated the purchase of the helicopters for Mike Arroyo in 2004, and five years the sale as brand new of two of them to the PNP.

However, some senators were quick to point out discrepancies in the lease contract, opening it to question.

Sen. Panfilo Lacson had alleged that all five choppers were really owned by Mike Arroyo, and testimony so far in the blue ribbon committee appears to support this.

The two used units and a brand new one were reportedly sold to the PNP for P105 million, with the two older choppers sold for higher than brand new prices.

On Wednesday, the committee chaired by Sen. Teofisto Guingona III wrote to Iggy Arroyo requesting his presence at the next hearing on Monday.

While both chambers of Congress hew to the tradition of parliamentary courtesy—where members are not called to testify in the other’s committee investigations—Guingona said that in this case the public interest trumped tradition.

Belmonte said there was no need for Guingona to write him as a courtesy to compel Ignacio Arroyo to testify since no parliamentary courtesy would be violated should the latter decide to go to the Senate.

“No, no need. He’s a person who voluntarily made a statement that is very relevant to and in fact has a strong influence on an information that has been aired in the Senate and (so) I call upon him to go there and back it up,” Belmonte said.

Thus, Archibald Po, the owner of Lionair, could file a countersuit for perjury against the Arroyo brothers for using a “contrived” and “spurious” lease agreement to disprove Mike’s ownership of the aircraft.

“I challenge Iggy Arroyo to produce the check that would show payment to Lionair of P9.8 million for the supposed lease of the helicopters,” Drilon told reporters.

“Bring out the check or any other evidence to prove that Lionair was really paid that amount for the lease—because I believe there was no payment, which means the lease was never effective and only resorted to to shore up their defense, futile as it is, that Lionair is the owner of the choppers,” Drilon said.

He said that because of this, Po could answer the perjury charges filed against him by Mike Arroyo with his own suit.

“The affidavit (shown by Fornier) was notarized so it was made under oath. If Iggy says his brother is not the owner, we in the Senate have received numerous pieces of evidence to the contrary,” Drilon said.

He, however, cautioned the blue ribbon committee about using its subpoena power to compel Iggy Arroyo to testify.

“I cannot speak for the Senate but I am not in favor of issuing a subpoena to a member of the House. We have invited Iggy to shed light on his statements made in relation to a matter being investigated by the blue ribbon committee,” Drilon explained.

As a resource person

He said the invitation meant Iggy Arroyo was being asked to attend the hearing as a resource person “because he appears to have knowledge of certain events relevant to our investigation.”

“But since Iggy is a member of the House, should he choose not to honor (the invitation), we will honor the tradition of not compelling him to attend our hearing,” Drilon said.