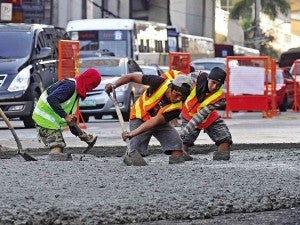 MORE TRAFFIC Repairing roads is never fun to both workers and commuters. Shoveling concrete for the reblocking of Edsa at Boni-Southbound in Mandaluyong City on Saturday gets a heap of cursing in cyberspace for DPWH and MMDA for doing the work at daytime and on a weekend, too, causing bumper-to-bumper traffic on Metro Manila’s main thoroughfare. ANDREW TADALAN

Malacañang is not running out of solutions to the perennial traffic congestion in Metro Manila, which, according to a Japanese study, results in potential income losses of P2.4 billion a day.

But the problem is the implementation of those solutions, compounded by the lack of political will among government officials.

The government, however, appears to be in no rush to carry out those measures, as Valte gave no timetable for their implementation.

Valte spoke as motorists on the southbound stretch of Edsa, from Quezon City to Makati City, cursed the Department of Public Works and Highways (DPWH) and the Metropolitan Manila Development Authority (MMDA) for slowing traffic down to a crawl by repairing the road at daytime.

The MMDA announced on Friday that the DPWH would be reblocking five points on Edsa located in Quezon, Mandaluyong and Caloocan cities and one on Commonwealth Avenue, also in Quezon City, over the weekend.

The reblocking started at 10 p.m. on Friday.

The MMDA said on its Twitter account that the reblocking in the Boni area will affect two southbound lanes on Edsa.

The result was horrendous traffic congestion on the belt highway.

On the southbound stretch of Edsa, the DPWH is reblocking from Kaingin Road to Dario Bridge in Quezon City, from Boni Avenue to Mayon Street in Mandaluyong City, and from the A. de Jesus U-Turn to J. Mariano Street in Caloocan City until Monday.

On the northbound side, repairs will be done on the stretch of the highway from Fema Road to the Kaingin Footbridge in Quezon City and on the stretch from G. de Jesus Street to Malvar Street in Caloocan City.

The MMDA said most of the repaired blocks were already “curing”—the concrete was drying—as of yesterday afternoon.

The closed lanes of the highway were expected to be reopened Sunday, the MMDA said.

Citing a study by the Japan International Cooperation Agency (Jica), Socioeconomic Planning Secretary Arsenio Balisacan said on Friday that P2.4 billion in potential income is lost daily due to gridlock in Metro Manila.

Speaking on state-run dzRB radio, Valte acknowledged that the loss is “huge” and said the government was giving priority to the decongestion of Edsa, where 3,600 city buses carry hundreds of thousands of people to their jobs and schools every day.

The 3,600 city buses have franchises, but thousands more without franchises and provincial buses bring the number of buses plying the Edsa route to 12,000 every day.

To ease traffic on Edsa, Valte said the government was going after unfranchised buses and limiting the number of buses on Edsa at certain hours of the day.

But the long-term solution, Valte said, is the creation of “transport hubs” on the fringes of Metro Manila, a plan that will remove provincial buses from Edsa and other congested roads in the metropolis.

Provincial buses will load and unload passengers at the hubs, reducing the number of large vehicles on metropolitan roads.

Valte said “north and south terminals” were being built. The south terminal, located in Parañaque City, is about to be finished, she said.

She mentioned “various infrastructure projects” under way to improve traffic in the metropolis, including road maintenance and flood mitigation works.

Valte said the DPWH wanted to finish paving all national roads by 2015 or 2016.

She said she wasn’t aware of any new traffic plan such as further limiting the number of cars on the road.

MMDA can’t do it alone

The agency has to deal with 17 local governments for coordinated enforcement of traffic rules, she said.

But the cities do not seem to see gridlock as an economic problem and the Palace, dependent on local governments for political support, seems not to have the will to whip local officials into finding solutions to the traffic problems in their own cities.

Asked about that, Valte said, “That’s one of the things being discussed on the Metro Manila Council.”