‘Gloria’ an abomination in Bataan fishponds 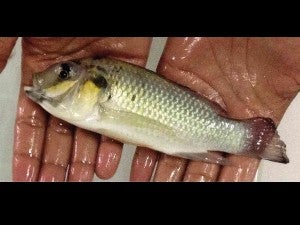 THE BLACK chin tilapia, which was christened “Gloria” or “tilapiang Arroyo,” is considered a pest in Bataan. PHOTO FROM BFAR

DAGUPAN CITY—No one wants this “Gloria” around their fishponds.

An exotic tilapia, called Gloria, is proving to be too prolific and is becoming a  pest in ponds in Bataan where bangus (milkfish) is cultured, a Bureau of Fisheries and Aquatic Resources (BFAR) official said.

Westly Rosario, BFAR Research Center chief here, said Gloria, or the black chin tilapia (Sarotherodon melanotheron), was introduced into the waters of Bataan several years ago, but it was not known who brought it into the country and why it was named after former President Gloria Macapagal-Arroyo.

“Maybe it’s called Gloria because of its size.   At their biggest, they grow to about 4 inches and weigh only 50 grams. But they are so prolific, and they occupy bangus culture areas that fish growers are having problems on how to get rid of them,” he said, drawing comparison with the petite Arroyo who stands about 5 feet.

Fish farmers resent the presence of Gloria in their ponds because the fish multiply fast and compete with feed meant for bangus, Rosario said.

Also, because of their sheer number, the fish  affect the carrying capacity of water in ponds, he added.

“It is called those names because of the mole (dark pigmentation) under its lower jaw,” Bien said in a telephone interview. Arroyo has a prominent mole on her left cheek.

Bien said they had no record on when or who brought Gloria into the country but he said the species could have been kept in an aquarium and later released into the waters of Bataan and Bulacan until they reproduced in the wild.

“It is just like the janitor fish and knife fish that flourished in Laguna de Bay,” he said.

Bien said the fish might not be growing big because they were in the wild and not properly nourished and cultured.

“Gloria, however, tastes just like the other tilapia species although they do not meet the standard size [for the market],” he said.

Gloria, he said, is edible and best served fried and crispy.

Rosario said 14 years ago, French scientists experimented with crossbreeding the black chin tilapia with the Nile tilapia (Tilapia nilotica), but stopped the project because it did not yield desired results.

“We did not allow the black chin tilapia to be brought into the country and to be crossbred with the native tilapia (Oreochromis mossambicus) and  pla-pla (Oreochromis niloticus),” he said.

Rosario said they instead produced the molobicus or the saline-tolerant tilapia by crossbreeding the Mozambique tilapia (Tilapia mossambica) and the Nile tilapia.

Rosario said the BFAR Research Center was studying Gloria as an experimental feed for sea bass, which is being cultured here.

Live Gloria is sold for only P15 to P20 a kilogram in Bataan, he said.

“But we do not want to bring the species to Pangasinan for culture,” he said, noting that this might encroach on fish ponds from where many Pangasinense get their livelihood.