Another tarsier, boxed on a bus, dies in urban jungle 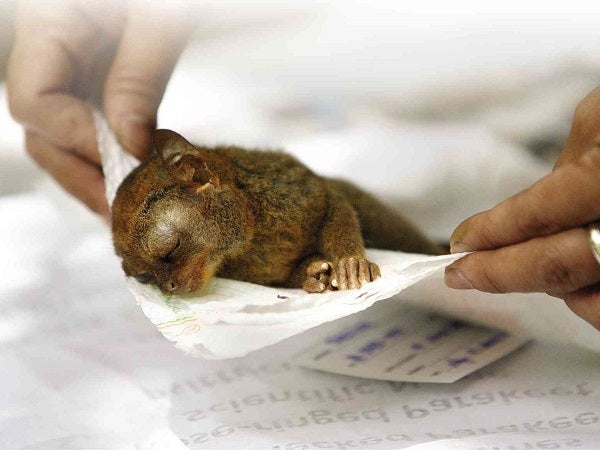 CUTE, CUDDLY—AND COLD A tarsier found in Quezon City, the second to be rescued in the metropolis since last month, lies dead when shown to the media Friday, a reminder that what thrives in the wild should stay in the wild. MARIANNE BERMUDEZ

In another dose of bad news for wildlife conservationists, a tarsier was found in Metro Manila and died a few days later despite efforts to feed it and simulate its natural habitat at an animal rescue center, an environment official announced on Friday.

The loss came two weeks after another tarsier, an endangered species, turned up in the urban jungle—on a golf course in Makati City—and died five days later.

The second tarsier was found inside a juice box that was apparently left behind by a passenger on a bus in Project 2, Quezon City, according to Theresa Mundita Lim, director of the Protected Areas and Wildlife Bureau (PAWB).

The 124-gram adult male was turned over to PAWB’s care at Ninoy Aquino Parks and Wildlife Center on July 2 and placed in the same cage where the first tarsier was kept.

Caretakers placed leaves and branches in the cage to simulate the creature’s forest habitat and tried to feed it mealworm, a food substitute for insect-eating animals in captivity.

“But it would not eat even when we tried to give it other types of food,” Lim said.

Late Thursday afternoon, the PAWB chief received a report from veterinarian Rizza Salinas that the second tarsier had also died. The cause of death was not immediately known, but Lim said “we were not really surprised because at the start it looked weaker than the first tarsier and it was not eating any food.”

The tiny primate was found in a juice box left on an Elavil tourist bus that came from Samar province, Lim noted.

“Because the bus came from Samar, we’re fairly sure the tarsier was taken from there,” she said, adding that tarsiers are also found in neighboring Bohol and Leyte provinces.

Lim expressed frustration over people who would still take tarsiers from the wild to be their pets.

“This is disturbing. People think tarsiers are cute and want to keep them. They don’t realize that tarsiers don’t survive for very long outside their natural habitat.”

The government’s tourism campaign, which often features tarsiers in its ads as one of the natural attractions in the Philippines, had apparently raised awareness about the animal, she noted.

The first ill-fated tarsier was found June 21 on a tamarind tree at the Manila Golf and Country Club inside the upscale Forbes Park subdivision.

According to its PAWB handlers, it initially showed no signs of stress and ate well when placed in a small cage, but often stayed out of view behind leaves and branches. Pneumonia and cardiac arrest were listed as the cause of its death.

The Philippine tarsier (Tarsius syrichta) is one of the smallest known primates in the world, growing no larger than an adult person’s hand. Its size ranging from 118 to 149 millimeters, it usually weighs between 113 to 142 grams.

Endemic to the Philippines, tarsiers are nocturnal creatures that live on a diet of small lizards, frogs and insects. They have thin, rough fur, whose color ranges from gray to dark brown.

In 1986, the Philippine tarsier was listed as endangered by the International Union for Conservation of Nature (IUCN) Conservation Monitoring Center. The IUCN Red List of Threatened Species currently categorizes the species as near threatened.