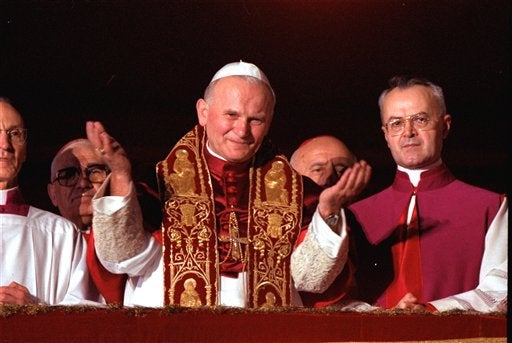 In this Oct. 22, 1978 file photo Pope John Paul II blesses the faithful in St. Peter’s Square from a Vatican City balcony right after he was named Pontiff. A Vatican official says Pope John Paul II has cleared the final obstacle before being made a saint. A commission of cardinals and bishops reportedly met Tuesday, July 2, 2013 to consider the case and signed off on it, leaving only Pope Francis to approve it. A Vatican official confirmed that the decision had been taken some time back and that Tuesday’s meeting was essentially a formality. (AP Photo )

VATICAN CITY — Pope Francis gave the go-ahead on Friday for his late predecessor John Paul II to be made saint by the end of the year and granted a rare exception for John XXIII to be canonized at the same time.

The Vatican said Francis gave his widely expected formal approval to a second miracle attributed to John Paul II at a meeting with Cardinal Angelo Amato, head of the Congregation for the Causes of Saints.

Details of the supposed miracle have not been revealed.

In the case of John XXIII, however, Francis “approved the favorable votes” from the Congregation for the canonisation even though no second miracle has been found, in a break with the usual procedure.

A consistory, a meeting of cardinals, will now be held to determine the exact date for the canonisations but Vatican spokesman Federico Lombardi said they would take place “before the end of the year”.

The long road to sainthood normally requires two “confirmed” miracles, the first of which is necessary for beatification, a hurdle the Polish pope cleared just six months after his death in 2005.

That was the healing of a French nun, Sister Marie Simon-Pierre, whose recovery from Parkinson’s disease after praying for the late John Paul II’s “intercession” apparently had no medical explanation.

John Paul II was hugely popular through his 27-year papacy, and at his funeral in 2005, crowds of mourners cried “Santo Subito!” — which roughly translates as “Sainthood Now!”

Nicknamed “The Good Pope”, John XXIII reigned from 1958 to 1963 and made his name by calling the historic Second Vatican Council (1962-1965) which overhauled and modernised the Catholic Church’s rituals and doctrines.

He is often compared to Pope Francis for his pastoral attitude and charisma.

Asked about the exemption made by Francis, Lombardi said this was “a very specific case”.

“Everyone knows the virtues and the personality of pope (Angelo) Roncalli, there is no reason to explain the reasons for his sanctity,” he said.II,” it said.