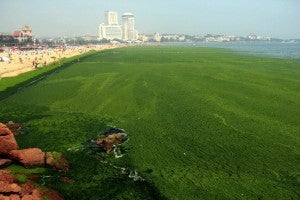 A view shows an algae covered public beach in Qingdao, northeast China’s Shandong province, on Thursday, July 4, 2013. The seas off China have been hit by their largest ever growth of algae, ocean officials said, with vast waves of green growth washing onto the shores of the Yellow Sea. AFP PHOTO

BEIJING—The seas off China have been hit by their largest ever growth of algae, ocean officials said, with vast waves of green growth washing onto the shores of the Yellow Sea.

Pictures showed beachgoers swimming and playing in the green tide in the eastern city of Qingdao, while bulldozers shoveled up tons of algae from the sand.

The State Oceanic Administration said on its website that the algae, enteromorpha prolifera, started to appear a week ago and had spread across an area of 28,900 square kilometers (7,500 square miles).

The previous largest bloom was in 2008 when it affected around 13,000 square kilometers, it said.

Qingdao officials said they had removed around 7,335 tons of algae, the official Xinhua news agency reported.

The algal phenomenon is usually caused by an abundance of nutrients in the water, especially phosphorus, although the triggers for the enormous blooms that began to appear in the Yellow Sea in 2007 remain uncertain.

The China Daily quoted professor Bao Xianwen, of the Qingdao-based Ocean University of China, as saying: “It must have something to do with the change in the environment, but we are not scientifically sure about the reasons.”

The algae are not toxic nor detrimental to water quality, but lead to extreme imbalances in marine ecosystems by consuming large quantities of oxygen and creating hydrogen sulphide.