General in ‘Morong 43’ arrest up for key post in W. Visayas–sources 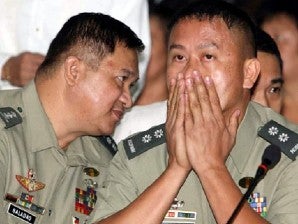 FACING CHARGES  Then Colonel, now Brigadier General Aurelio Baladad (L), and Lieutenant Colonel Jaime Abaway (R) get a mouthful from former Commission on Human Rights Chairperson Leila de Lima after they failed to produce the 43 health workers detained on suspicion of being members of the NPA during a public hearing of the CHR. INQUIRER FILE PHOTO

MANILA, Philippines — An Army general charged with alleged torture and the illegal arrest of health workers known as the “Morong 43” three years ago will take a key command post in Western Visayas, military sources said.

Brigadier General Aurelio Baladad will soon assume leadership of the Army’s 3rd Infantry Division based in Capiz, and holds jurisdiction of Western Visayas, according to the sources privy to the officer’s appointment but are not authorized to speak to media.

A member of the Philippine Military Academy Class 1982, Baladad is currently the Deputy Chief of Staff for Operations (J3) at Camp Aguinaldo.

He will replace retired Major General Jose Mabanta, who stepped down from his post on June 19.

In 2010, Baladad headed the Army’s 202nd Brigade when they captured 43 suspected communist rebels  during a raid in a private residence in Morong town, Rizal.

Authorities claimed they found subversive documents and firearms and accused the health workers of bomb-making activities during the arrest.

Five of the health workers admitted they were NPA members and availed of government’s amnesty program. Last year, six of them reportedly rejoined their armed comrades. The rest were released after the government withdrew charges against them.

Baladad also served as acting commander of Army’s 9th Infantry Division in Bicol region before he assumed post as deputy chief of staff for operations.

Also set to take a key command post is Major General Gregorio Pio Catapang Jr., who will assume as commander of the Northern Luzon Command based in Tarlac, sources said.

Catapang is currently the chief of Army’s 7th Infantry Division based in Nueva Ecija. He is from PMA Class 1981.

The orders have been signed by President Benigno Aquino III, the sources said.