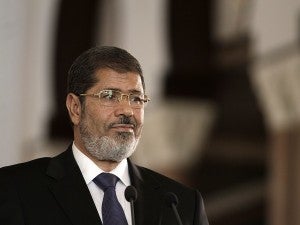 CAIRO—Following are key developments in Egypt since millions took to the streets Sunday to demand the resignation of Islamist President Mohamed Morsi, leading to his ouster by the army on Wednesday.

— Chanting “Leave!” and “the people want the ouster of the regime,” crowds demonstrate across Egypt in response to a call from the grassroots movement Tamarod—Arabic for rebellion.

— In Cairo the protesters gather around the presidential palace and in Tahrir Square, epicenter of Egypt’s 2011 revolution.

— Huge demonstrations also take place in Alexandria, Menouf and Mahallah in the Nile Delta, and in the canal cities of Suez and Port Said.

— The army speaks of “several million” protesters and a military source tells AFP: “It is the biggest protest in Egypt’s history.”

— Morsi supporters rally in the Cairo district of Nasr City. The army puts their numbers at 25,000.

— At least 16 people are killed nationwide, eight during clashes between government supporters and opposition forces outside the Cairo headquarters of Morsi’s Muslim Brotherhood.

– Morsi calls for dialogue, but Tamarod insists he step down.

— Protesters set fire to the Brotherhood headquarters in Cairo then loot it.

— Tamarod gives Morsi until 1500 GMT on Tuesday July 2 to quit or face an open-ended campaign of civil disobedience.

— The army gives Morsi 48 hours to meet the “people’s demands” or face an imposed solution.

— In Tahrir Square, anti-Morsi protesters erupt in joy on hearing the army’s statement.

— The National Salvation Front, the main opposition coalition, says it would not support a “military coup” and trusts the army statement does not mean it would assume a political role.

— The spokesmen for the presidency and the cabinet quit.

— Opposition groups choose leading dissident Mohamed ElBaradei to represent them in the negotiations called for by the army.

— Morsi’s opponents pack Tahrir Square, while his backers join a sit-in in the Nasr City neighborhood.

— Gunmen kill 16 people and wound 200 others at a Cairo rally supporting Morsi, the health ministry say.

— As the army deadline passes, Morsi proposes a consensus government as a way out of the country’s crisis.

— Sisi also announces a freezing of the Islamist-drafted constitution and early presidential elections.

— Morsi denounces the move as “a coup” and in a prerecorded speech says, “I am Egypt’s elected president.”

Read Next
Strong winds, rain displace families in Dumanjug
EDITORS' PICK
PH back to low-risk status for COVID-19
P120.22 billion COVID-19 funds still unspent as of end-September
EDITORIAL: Power play
Legarda emphasizes role of ICC/IPs in nation building this IP month
Work-From-Home is here to stay and requires reliable logistics
USAID Opportunity 2.0 calls for applicants for grants for out-of-school youth engagement
MOST READ
Isko to critics after remarks vs Robredo: I’m sorry, this isn’t about Mr. Congeniality
PBB housemate Brenda Mage called out for sexual joke to Eian Rances
Martires asks why he is being singled out over issues on releasing SALNs
Why the Marcos brand remains popular
Don't miss out on the latest news and information.