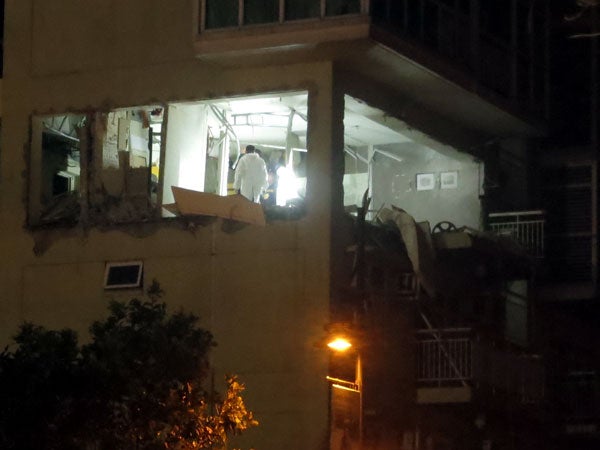 MANILA, Philippines — A victim of the explosion at Two Serendra condominium in Taguig City more than a month ago died shortly after midnight Thursday, his lawyer said.

Angelito San Juan passed away at the St. Luke’s Hospital in Fort Bonifacio Global City, Taguig, due to organ failure around 12:20 a.m.,  Raymond Fortun told INQUIRER.net in a text message.

Informed of San Juan’s death, Jorge Marco, spokesman for developer Ayala Land Inc., said in a statement: “We are saddened by the demise of Mr. Angelito San Juan and we extend our deepest sympathies and condolences to his family.”

San Juan, who flew to the Philippines to attend a wedding, was on his way out for dinner from Unit 501B, center of the explosion, May 31.

Investigators considered the possibility of an urban terrorist attack, but Interior Secretary Manuel “Mar” Roxas said in a press conference that the blast was “consistent with gas explosion, most likely LPG [liquefied petroleum gas]”.

Two Serendra is among the 61 residential and commercial establishments in the entire BGC using gas pipe-in systems.

After the incident, however, Ayala Land Inc. decided to completely shut down the system of the condominium, including One Serendra.

Three others died and several were wounded in the blast.

San Juan, a California resident, turned 63 when he was caught in a blast that tore through the high-end condominium last May 31.

It turned out to be his last.

Fortun cited the cause of his death as “cardiopulmonary arrest secondary to multiple organ failure.”

“The antecedent cause was burns, and underlying cause was septic shock,” Fortun said.

Fortun said that although San Juan’s burns were healing, “his organs were severely distressed.” “He was receiving dialysis round-the-clock because his kidneys were not functioning properly. He had regular blood transfusions to resist infections. The doctors were waiting for his condition to stabilize because they feared his body could not bear the stress of an [immediate] operation,” the lawyer said.

San Juan is the fourth fatality of the explosion which is believed to have been caused by a gas leak. Three appliance store employees aboard a passing delivery truck were crushed to death by a part of a wall dislodged from the exploding apartment.

The explosion occurred only hours after San Juan arrived in the Philippines, on a brief vacation to attend the wedding of his high school classmate’s daughter in the following days.

He was lent the unit by his friends and fellow US immigrants George and Marianne Cayton. The Caytons bought the property in 2008 as their vacation home in the Philippines.

San Juan was on his way out to a birthday dinner when the explosion tore through the apartment at around 8:15 p.m.

Despite his burns, San Juan was still able to make it to the ground floor, where his friend, Herminia Ochoa, was waiting for him. Ten minutes after the blast and before he was whisked off by the ambulance, San Juan was able to tell Ochoa that as he was opening the apartment door, his hand on the knob, “there was an explosion, and he felt electricity all over his body.”

Investigators led by Roxas initially tagged San Juan as a “person of interest” in the case but when the cause of the blast was narrowed down to a gas buildup, from a still unlocated leak, San Juan was virtually cleared of any suspicion.

“The family has not made any decisions on whether they will be taking any legal steps as a result of [San Juan’s] death,” Fortun said.

Fortun, however, called out Ayala Land Inc., shareholder of Two Serendra developer Serendra Inc., for a statement released Tuesday announcing the permanent shutdown of the centralized gas system in residential units of the One and Two Serendra condominium compounds.

“It appears to be an implied admission of liability, that their gas system is unreliable. It was done even before the conclusion of the investigation,” Fortun noted.

Fortun also criticized Serendra Inc. for virtually “blaming the unit owners” when it said in the statement that it was shutting down the gas system because it could not “ensure the continuing compliance by individual unit owners with the required safety measures within their units.”

“I feel that that corporate statement is highly insulting to the unit owners. Ayala enticed these owners to purchase a property that is expensive, and most of these people purchased with hard-earned money. Now they are being blamed for failing to do safety measures? I think to begin with, the obligation to take care and to put up safety measures and to maintain them belongs to the building management and property managers,” Fortun said.

Ayala Land Inc. has been coordinating with the San Juan family regarding San Juan’s hospitalization, and now, his funeral, but had not communicated with the Caytons, Fortun said.

Fortun, also legal counsel to the Caytons, admitted that Marianne, when she was here in the Philippines from June 7 to June 10 to submit documents to aid in the investigation, feared a coverup in the case “borne out of lack of any movement in so far as the investigation is concerned.”

“I am still of the belief that investigators are doing everything possible to arrive at the truth here,” Fortun said. “The only request of San Juan and Cayton families is just speed it up. Do your best so this can be concluded at the earliest possible time,” he added.

“I’d like to think it’s an accident and nobody wanted this. As to whether there is someone to blame, caused by negligence…that is up to investigators to determine. That’s what we are waiting for…We hope investigators can put things together so proper steps can be made to determine fault and avoid similar incidents in the future,” Fortun said.

San Juan’s testimony, especially on what occurred immediately before the blast, would have been crucial to the ongoing investigation on the cause of the gas buildup, but Fortun said the Interagency Task Force investigating the case already had “evidence as to how the [gas] leak occurred, where the blast emanated, and what triggered it.”

“It was only what caused that spark that led to the blast that needed to be filled up by San Juan,” Fortun said, adding gas “can be triggered by the smallest spark,” even from a mere static electricity.

Fortun said the San Juan family, led by San Juan’s eldest brother Ruben, who had stayed in the Philippines to look after San Juan, was more concerned now about San Juan’s burial arrangements.

San Juan’s remains were set to be transferred to the Evergreen Memorial Parlor in Pasig city on Thursday afternoon, for a two-day wake for San Juan’s distant relatives in the Philippines. His remains will be brought to the United States for burial.

San Juan was a data architect for a car company in the United States, where his immediate family is also based. He leaves behind his wife, and two children already of age.