SK, hope of motherland, but ‘breeding ground for political dynasties’ 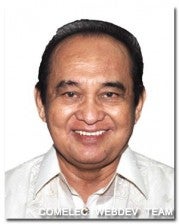 Will Congress abolish its nursery?

For the Commission on Elections (Comelec), the Sangguniang Kabataan (SK), or local youth councils, are nothing more than a “breeding ground for political dynasties” and, worse, of corrupt politicians.

Comelec Commissioner Lucenito Tagle told reporters that the poll body was planning to ask Congress to scrap the program.

“We don’t see anything of importance that has been produced by the SK. We have many cases here where parents are the ones intervening in vote-buying and irregularities (in SK elections),” Tagle said in an interview.

“Imagine at that age, that’s already [their] charge against each other. It shouldn’t be like that. They are being exposed to all of these things at an early stage,” he said.

“Get rid of the SK,” he said. “First of all, we spend so much for the SK elections when only 2 million voters (aged 15 to just below 18) participate. The turnout is also low and there are no good results for the youth.”

Tagle agreed with the observation of the Parish Pastoral Council for Responsible Voting that the program had become a “breeding ground for political dynasties.”

“Those who become candidates are the children of the barangay (officials) as well as those of the mayor, and the congressman. They are [being groomed] to run as future mayors, congressman,” he said.

Tagle said the Comelec had also received “many complaints” about alleged financial shenanigans in the councils.

“It’s still so early but they have become traditional politicians already … I think there would be congressmen who would be amenable to its abolition but we don’t know,” Tagle said. “The problem is it has also become the breeding ground for dynasties. There might be opposition.”

The SK used to be called the Kabataang Barangay (KB), created by then President Ferdinand Marcos in 1975 in response to the United Nations’ Convention on the Rights of the Child that sought to provide a vehicle for the youth to become engaged in community affairs and become productive leaders.

During the martial law years, the organization accomplished numerous programs for livelihood, sports and culture, but it was also mired in controversies in an era of student activism and political ferment that diminished its popularity.

The Marcos creation was abolished in 1991. Elections for its current incarnation, held simultaneously with the barangay balloting, were first held the following year.