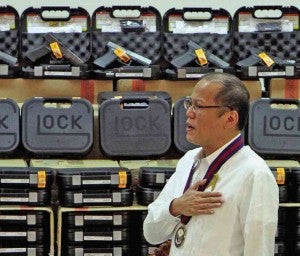 After assuming office in June 2010, President Aquino said he made a startling discovery: Nearly 50 percent of the PNP had no service firearms.

“That means half of your ranks perhaps relied on amulets or prayed you’d be bulletproof, or thought you could talk your way out of a firefight,” he told a large crowd of policemen.

Nothing wrong with saying a few prayers while you chase an armed criminal down the street—but maybe it’s also time you stop wearing amulets.

Like most European and American law enforcers, nearly half of the country’s 148,000 policemen will soon be carrying Glock 17 pistols—the kind of weapon used by British troops in Afghanistan—as they patrol the streets.

In ceremonies at the Philippine National Police Multipurpose Hall, Aquino on Tuesday distributed the first batch of Glock guns to policemen who have no service firearms and could be relying on amulets or prayers to dodge bullets.

Initially, 22,603 units of the Glock 17 Generation 4 safe-action 9mm pistols are to be distributed to the PNP. Altogether, 74,879 Glock guns are planned for distribution.

In essence, the government was putting so much responsibility on policemen to maintain law and order in a country of 95 million Filipinos, yet cared little about their welfare, Aquino said.

Aquino handed over the pistols to 21 policemen from different units around the country in a ceremonial distribution witnessed by Interior Secretary Manuel Roxas II and PNP Director General Alan Purisima.

“Indeed this is a significant day for national security… It won’t be long before we provide the total 74,879 guns for the police force,” the President said. “At this positive pace, we’re close to reaching our target of 1:1 police-to-pistol ratio.”

Aquino said no one could have been happier than the late Interior Secretary Jesse Robredo, who worked hard for the gun distribution program before he died in a plane crash last August.

The Glock 17 pistol is the service firearm used by 60 percent of police forces and law enforcement agencies in Europe, the United States and Asia. They are light, easy to carry and easy to maintain, police officials said.

UK troops in Afghanistan were issued the same Glock 17 Gen 4 pistols in January for their personal protection and as a second armament in case their SA80 rifle fails. 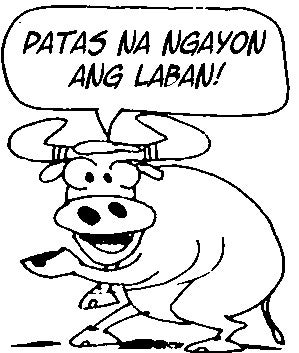 The Glock 17 weighs 905 grams when loaded and comes with a magazine with 17 bullets, according to a Bloomberg report.

It is used by the Swedish and Norwegian militaries and Swiss Army special forces. At least 65 percent of law enforcers in the United States, including the Federal Bureau of Investigation and Drug Enforcement Administration, also use it, the same report said.

quino said the PNP received a P1.198-billion budget for the acquisition of the Glock pistols but saved P200 million, which was used to acquire 12,000 to 15,000 other weapons.

In his speech, Aquino cited Police Officers 2 Edlyn Arbo and Felipe Moncatar, both of whom fought off criminals without a service firearm. He directed Roxas and Purisima to promote them.

Arbo chased a hold-up man who had robbed jeepney passengers, and ended up injured. Moncatar collared “most wanted” persons and members of crime syndicates in Bacolod City.

“The whole country salutes your courage and commitment,” Aquino said.

Aquino cited the PNP’s gains, such as the drop in crime volume from 2010 to 2012—a nearly 40-percent drop in car theft cases, a 73-percent decrease in kidnap for ransom cases and a 63-percent reduction in the number of private armed groups, among others.

But given that the current 1:1,500 ratio of policemen to population is far from the ideal of 1:500, the President allotted P9 billion for the PNP Transformation Plan from 2013 to 2016.

The plan’s main feature is the hiring of 15,000 non-uniformed personnel every year for administrative jobs, and allowing policemen to go out of precincts to beef up the security in communities, Aquino said.

The government’s purchase of M-4 rifles for field patrol is now sealed, he also said.

No room for bullies

“With these reforms, I expect our law enforcers to be at the forefront of combating crime and transactionalism. There’s no room in our force for bullies in the streets, or patrons of bad elements,” he said.

“To those who don’t shape up, I assure you you’d end up in prison which we’re expanding,” he said.

Roxas told reporters the President had approved the allocation of P9 billion for the procurement of high-powered firearms and other equipment.

He said the police would immediately start the public bidding for P800 million worth of M-4 assault rifles and 2,500 police vehicles.

Considered the biggest procurement project in PNP history, Roxas said the acquisition of the Glock pistols would end the shortage of short firearms for the 148,000-strong police force.

“The purchase of the Glock pistols is part of the government’s effort to standardize the procedures in the issuance of service firearms to all PNP uniformed personnel,” Roxas said. “Our goal is to achieve a ratio of one gun to one police officer.”

Police officers located in highly urbanized cities and tourist destinations will be prioritized in the distribution of the firearms, Roxas said.

“These are the places which have the highest percentage of crimes,” he said.

Roxas said Aquino had also approved the PNP plan to hire 15,000 civilian employees to replace policemen assigned to administrative functions. At present, about 60,000 uniformed PNP personnel are carrying out office work, he said.

“Our police-to-population ratio is one of the lowest in the world,” he said.

“By doing this, we can immediately add police presence in our communities,” he stressed.

“The patrol vehicles and radios will be distributed nationwide so that our PNP officers will be more mobile and coordinated in running after criminals and maintaining peace and order in their respective areas of jurisdiction,” he said.