All senators complied with rule–Comelec 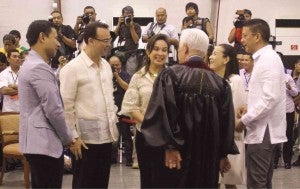 Comelec Chairman Sixto Brillantes Jr. talks to five winners of the senatorial race during their proclamation on May 16, 2013 (from left), Juan Edgardo Angara, Alan Peter Cayetano, Loren Legarda, Grace Poe and Francis Escudero. The Commission on Elections on Monday, July 1, 2013, announced that the 12 newly elected senators had addressed the deficiencies in their statements of contributions and expenses, removing the stumbling block that would have delayed their assumption of office. JOAN BONDOC

MANILA, Philippines—The Commission on Elections (Comelec) on Monday announced that the 12 newly elected senators had addressed the deficiencies in their statements of contributions and expenses (SOCE), removing the stumbling block that would have delayed their assumption of office.

In an interview with reporters, Comelec Commissioner Christian Robert Lim said all the winning senators were able to comply with the rules of the commission last Friday, as far as their election expenses were concerned.

Lim, head of the Comelec’s campaign finance unit, added that the senators immediately addressed the deficiencies in their respective SOCEs after he released an urgent memo on the matter a few weeks ago.

Based on his memo, nine of the 12 senators did not submit the necessary copies of receipts they had issued to their contributors. They were Juan Edgardo Angara, Francis Escudero, JV Ejercito, Loren Legarda, Aquilino Pimentel III, Gringo Honasan, Grace Poe, Cynthia Villar and Antonio Trillanes IV.

Nancy Binay, Poe, Legarda and Honasan were also initially found to have submitted incomplete copies of receipts of expenditures, while Bam Aquino, Pimentel and Villar did not personally sign their sworn SOCEs.

Sen. Alan Peter Cayetano’s SOCE had no deficiency but his political party, the Nacionalista Party, did not submit certain documents.

“[But] as early as Friday [last week], all the winning senators were able to comply,” said Lim, adding that the senators also paid the fines they had incurred for the deficiencies in their SOCEs.

“They were able to address the concerns we raised when they submitted their amended SOCEs,” he said.

Promptly heeding the Comelec’s memo paved the way for the issuance of their Certificates of Compliance in time for their first day at work on Monday, Lim said.

Under Republic Act No. 7166, or the Synchronized National and Local Elections, anyone elected to any public office shall not enter upon the duties of his or her office until he or she has filed the statement of contributions and expenditures required.

As for the 38 winning party-list groups, Lim said the commission was still evaluating whether or not the documents they submitted were in full compliance with the SOCE requirements.