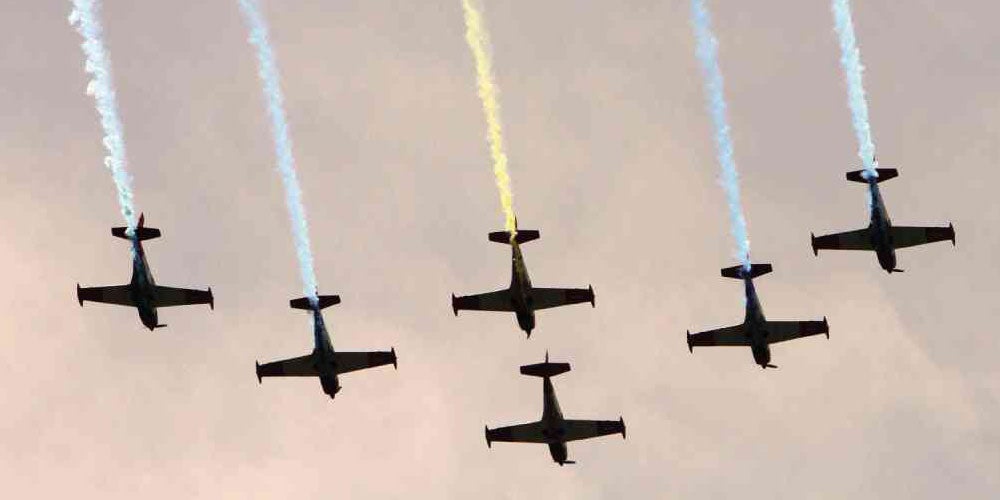 Members of the Philippine Air Force Flying School use several SF-260FH aircraft in an aerobatic demonstration during the PAF’s 66th anniversary celebration held at Clark Air Base, Pampanga, on Monday. The old Philippine Air Force had the famous aerobatic Blue Diamond squadron from the 1950s to the ’80s. LYN RILLON

It was the first time the event was held in this former US air base and it had nothing to do with the territorial dispute between the Philippines and China—but more because of congestion at Ninoy Aquino International Airport in Manila.

The decline in air power did not escape President Aquino, who vowed in his speech at the gathering to spend P75 billion to modernize the defense capability of the Armed Forces of the Philippines in five years.

“While we look back at the rich history of the Philippine Air Force, there is one thing that is noticeable: While we, in 1963, had the capability to help and send squadrons to other nations, why is it that in the last decades, it seemed that the wing of our Air Force had been clipped, and we rely only on old, rickety planes and equipment?” Aquino said.

Repeating a familiar theme of past neglect, the President slammed previous administrations that “ignored the well-being and interest of Filipino soldiers” while “intoxicated with power.”

Despite its problems, the PAF remained true to its basic principles of defending the rights and freedom of the nation and for coming to the aid of those affected by accidents, disasters, disease and poverty, according to the President.

“This morning, in celebrating the 66th anniversary of the PAF, the government shows a new face and our soldiers display a new face to the world,” Aquino said, adding that in just three years, the PAF is “flying with a new strength toward a stable future.”

He said the P28-billion modernization expenditures for the AFP in the first 19 months of his term almost equaled the P33 billion that three previous administrations spent on the same program.

Col. Miguel Ernesto Okol, PAF spokesman, said P43 billion of the P75 billion set aside for the AFP modernization would go to the PAF and Philippine Navy upgrades. 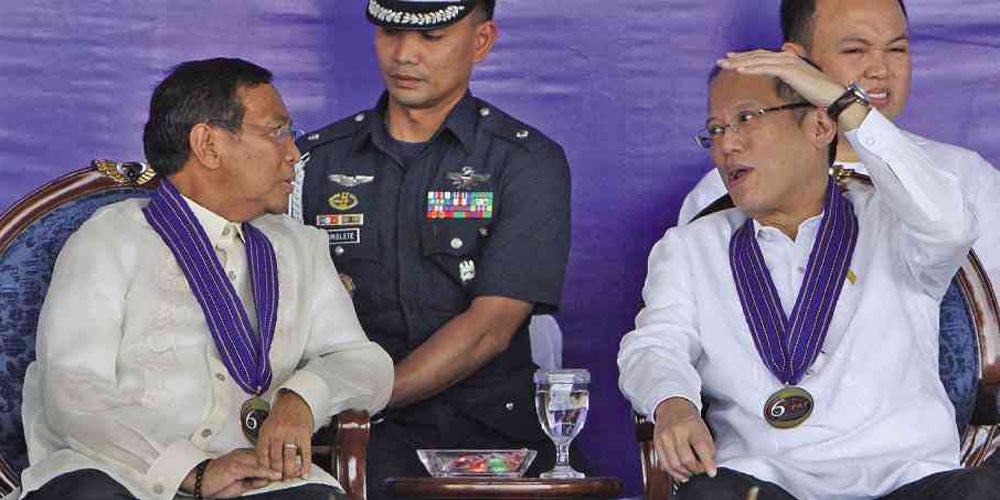 Vice President Jejomar Binay (left), who was forced to call off his planned visit to China to intercede for a convicted Filipino drug mule, chats with President Aquino during the 66th Philippine Air Force anniversary celebration held at Clark Air Base, Pampanga, on Monday. LYN RILLON

Okol said Clark hosted the event for the first time because it offered air space that could accommodate aerobatic shows without disturbing the flight plans of commercial airlines, unlike Villamor Air Base in Pasay City.

Aquino thanked Defense Secretary Voltaire Gazmin for having the dedication and initiative to raise the capability and quality of the AFP, and Lt. Gen. Lauro Catalino de la Cruz, PAF commander, for his leadership.

Aside from supporting the peace process in Mindanao and responding to disasters, the PAF reported making 28,300 sorties, 1,500 ground operations and 4,700 civil-military operations in 2012.

Aquino praised the PAF for attaining 99.6 percent in financial obligation efficiency, per the rating by the Department of Budget and Management.

The President also congratulated the 410th Maintenance Wing based in Clark for making a first: the repair of a C-130 transport plane.

He thanked the PAF for surpassing limitations by succeeding in the rehabilitation of 17 M-35 trucks, one N-22 Nomad transport aircraft, one UH-1H utility helicopter, one LC-210 aircraft and an MG-520 helicopter.

Aquino expressed despair over the crashes that had claimed the lives of PAF pilots and said that the search and retrieval operations for two pilots, whose plane crashed in Palawan province a week ago, were continuing.

This is possible, he added, if the government acts to meet the requirements of a modern AFP and if the people renew their respect and confidence in Filipino soldiers.

He urged PAF troops to wholeheartedly fulfill their tasks and make citizens “feel unafraid and safe.”

In his speech, De la Cruz described the PAF’s task of securing the archipelago as “a huge challenge.”

But he said the PAF “cannot be shaken from this task to protect the natural resources and property of the country.”