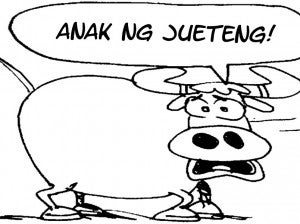 LUBAO, Pampanga—Rodolfo “Bong” Pineda is usually elusive, especially when “jueteng,” an illegal numbers racket that generates billions of pesos in revenue and a known source of payola to authorities, is in the news.

But basking in the glow of the political power of his wife and children is fine with Pineda, one of the country’s suspected jueteng lords.

Bong stood beside his daughter-in-law, Sta. Rita Mayor Yolanda Pineda, and daughter, Lubao Mayor Mylyn Cayabyab, as Supreme Court Associate Justice Jose Perez administered the oath of office to the governor and vice governor before the altar of the more than 400-year-old church built by Augustinian friars.

Governor Pineda won a second term while her son, after completing three terms as mayor of Lubao in 2007, is on his first term as vice governor.

Bong Pineda retreated to the corner of the nave and did not mingle or chat with people until the rites were over. He stayed for the Mass celebrated by San Fernando Archbishop Paciano Aniceto and 10 priests.

“I would have wanted to go [to the inauguration in 2010] but I assisted my granddaughter in a golf tournament,” Bong said.

Dennis is the only son of the Pinedas. He was said to be the family’s original candidate for governor in 2007 but withdrew for unknown reasons, supporting instead his mother who lost to Eddie Panlilio, a Catholic priest.

In February 2010, however, the Commission on Elections unseated Panlilio and declared Pineda the winner of the 2007 gubernatorial election after a recount. Pineda, however, did not assume office. She ran against Panlilio in the elections in May 2010.

Governor Pineda described her second term as “a mixture of sadness and happiness.”

“I’m sad because there are lots of work to do. I’m happy because I earned the trust of Kapampangans,” she said.

Bong said he had not meddled or interfered in the work of the governor. He said he would also stay off his son’s office and engagements.

While Bong had not set foot on the provincial capitol during his wife’s incumbency, he was known to have taken main roles in the election campaigns of his wife and son. The mayors of Lubao and Sta. Rita ran unopposed or faced token opposition.

Bong said he was busy with farming and other businesses.

Santiago said the authorities were unable to stop jueteng because police officials, led by the Philippine National Police chief and certain interior officials, were receiving bribes from gambling operators.

Pampanga Rep. Gloria Macapagal-Arroyo, who represents the second district, was not at the inauguration of provincial officials. No Arroyo relative or representative attended the event.

Governor Pineda said she did not know why the former President did not request to leave Veterans Memorial Medical Center in Quezon City where she had been detained since October 2012 for plunder in connection with the alleged misuse of P325 million in intelligence funds of the Philippine Charity Sweepstakes Office.

In the City of San Fernando, elected leaders belonging to the Liberal Party in the province held their own inaugural rites on Sunday.