Environment groups call for end to ‘age of coal’ 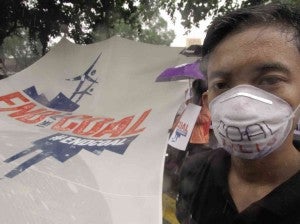 AN ENVIRONMENTAL activist unfurls a huge banner in Davao City on Friday as he joins environmentalists across the globe in the international protest to end the “age of coal.” A 300-megawatt coal power plant of Aboitiz Power is being constructed in Davao City. KARLOS MANLUPIG/INQUIRER MINDANAO

DAVAO CITY—Huddled under umbrellas, dripping wet and totally soaked by sudden rain on Friday, environmental activists unfurled a streamer calling for an end to the “age of coal,” as they blamed coal-fired power plants for the abnormal weather conditions fast becoming a new norm in Mindanao.

The protesters wore masks emblazoned with words such as “end coal now.”

“If we can ban smoking in Davao City, why do we allow coal?” one streamer read.

Juland Suazo, spokesperson of the environmental group Panalipdan, said they wanted to send the message not only in Davao but in the entire world as well that the age of coal has to end because, though it’s the fault of rich countries, it’s the poor people in poor countries who bear the brunt of the abnormal weather conditions and climate change.

Groups like the Network Opposed to Coal and the Dabawenyo Ayaw sa Coal, who fiercely opposed the Aboitiz Power Corp.-owned 300-megawatt coal-fired power plant Therma South Inc., joined the global action against coal by marching around Freedom Park here amid the sudden rain that flooded the nearby Bajada streets.

“Filipinos deserve to live in a coal-free environment,” Beau Baconguis, program manager for Greenpeace Southeast Asia, said in a statement distributed during the rally.

Baconguis said the country is obviously suffering from the effects of climate change and it was “simply illogical and immoral to pump more carbon dioxide emissions into the atmosphere” with more coal-fired plants.

“This will only bring more destruction and jeopardize the health and security of the country,” she said.

Baconguis said the aggressive development of coal-fired power plants in the country is “almost criminal,” as it contradicts the spirit of the Renewable Energy Law and other laws in the country that seek to mitigate greenhouse emissions.

“We are experiencing abnormal weather and climate-related disasters because of the use of fossil-based energy like coal,” Suazo said, as he recounted the second anniversary of the worst flooding here that killed 30 people. Germelina Lacorte, Inquirer Mindanao