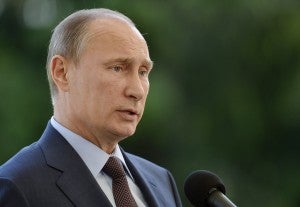 MOSCOW — Russian President Vladimir Putin has signed into law a controversial bill punishing people for homosexual “propaganda,” according to an official publication on Sunday.

The law introduces fines of up to 5,000 rubles ($156) for citizens who disseminate information “directed at forming nontraditional sexual setup” in minors or which may cause a “distorted understanding” that gay and heterosexual relations are “socially equivalent,” the publication showed.

Critics have called the bill homophobic and so vaguely defined that it would inevitably be used arbitrarily against gays and stir hate crimes in the country. However, it sailed through the parliament and Putin had promised in advance that he would sign the bill.

The fines go up to as much as 200,000 rubles ($6250) for officials if such “propaganda” is disseminated through the media or Internet.

Foreigners will not only be fined but face administrative arrest up to 15 days and eventual deportation, the law says. Organisations face fines of up to one million rubles and shutdown of their activity for 90 days.

Earlier this week Putin denied the law’s anti-gay nature. “We are talking about protecting children from the respective information,” he said.

“We ask that (other countries) do not interfere in our regulation,” he added, responding to massive criticism from Western countries and human rights groups.