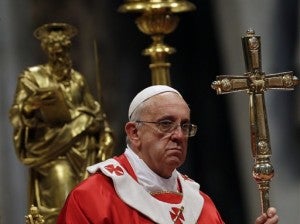 VATICAN CITY — Pope Francis praised on Sunday his predecessor Benedict XVI’s decision to resign as courageous, and called on pilgrims to follow the former pontiff’s example and put aside their egos to listen to their conscience.

“We have to learn to listen more to our conscience. But wait! This does not mean following our egos, doing what interests me, what is best for me,” he told pilgrims gathered to hear his Angelus prayer in St. Peter’s Square.

“Pope Benedict XVI gave us a great example… when the Lord made him understand, in prayer, what step he should take,” he said, referring to Benedict’s decision in February to resign St. Peter’s chair.

“He followed — with a great sense of discernment and courage — his conscience, the will of God which spoke to his heart,” he added.

Francis’s warning not to let self-interest prevail over integrity came two days after a senior Catholic cleric was arrested for corruption after allegedly plotting to smuggle millions of euros into Italy on a private jet.

The plot was discovered during a wider probe into the scandal-plagued Vatican bank, which the 76-year-old pontiff has determined to reform as part of his fight against corruption within the Roman Catholic Church.