Turtle haven in Mati under threat 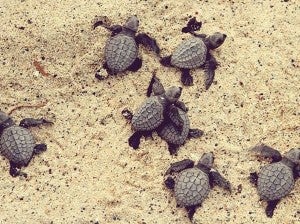 MATI CITY, Philippines—When the Inquirer Mindanao visited the coastal village of Dahican here on Friday noon, there was none of the usual crashing of the waves. The sea was calm—not ideal for skim boarding or surfing.

About 2 meters from where the water kissed the white sand were two concrete markers. And, unlike the placid sea, the round markers spelled trouble.

The markers were buried by surveyors of landowner Octavio Zamora, who was applying for a foreshore lease agreement (FLA) with the Department of Environment and Natural Resources (DENR). The markers, which were placed on June 12, when the country was celebrating Independence Day, served as boundaries of what Zamora wanted covered by the FLA. These, however, also covered a hatchery area for Olive Ridley and Hawksbill turtles.

“This should not be happening,” Winston Plaza of the Amihan Boys said.

The Amihan Boys are considered the “guardians of Dahican.” The group of 25 boys and young men, all residents of the village of Dahican, started as mere skim boarding enthusiasts nine years ago. Since then, they have become a common sight in the Dahican shores—skim boarding; surfing; picking up debris like driftwood, coconut husks and plastic wastes; and watching over the turtles’ nests.

“In the past four years, we were able to release 14,000 hatchlings,” Plaza said.

The group has also rescued 100 turtles that were either wounded or caught in fishing nets.

“Since January this year, we have released some 5,000 hatchlings,” he said, adding that the last release was made on June 21.

The Amihan Boys, who have set up camp (more like a beach front cottage made of salvaged driftwood) on the shores of Dahican, monitor the arrival of turtles at night.

“After the turtles lay and bury their eggs, we dig and transfer these to the hatchery,” he said, adding that they wait for some 55 days before the eggs are hatched and tiny turtles surface from the sand.

The hatcheries (there are two in Dahican) are areas fenced with plastic screens, preventing dogs and crabs from digging up the nests and eating the eggs.

“The hatcheries also prevent humans from stepping on the turtles’ nests,” Plaza said.

At day time, especially during summer vacations, tourists set up tents and try to skim or surf the waves. At night, when luck is on their side, they are treated to seeing an Olive Ridley or a Hawksbill crawl on the white sand, dig and lay eggs.

Villacorte served the administration of Mayor Michelle Rabat, who lost to her cousin, Carlo Rabat, in the last May 13 elections.

“We have planted the seeds for Dahican to become an ecotourism model. It is up to the new administration to decide what to do,” Villacorte said.

Art Boncato, regional director of the Department of Tourism, described Dahican as the “next wave destination” in the region.

“That’s what tourists want— sand and beach,” he said.

Boncato said Dahican, in a sense, is “unique for its 7-kilometer white sand beach and its biodiversity.”

He cited President Aquino’s signing of Republic Act No. 10560, declaring Davao Oriental a Tourism Development Area, which also means pushing for the province as a tourist destination, but “we have to protect the environment.”

“The [tourism] master plan should be anchored on ecological sustainability,” he said, adding that any development “should also follow the law of easement.”

Manny Isip, regional director of the DENR, said he has seen the markers in a recent visit to Dahican and that “these violated the law of easement.”

“That should not be allowed,” he said.

Isip said he has instructed the city environment and natural resources office of Mati City to look for the people who surveyed the land and buried the markers.

He said the DENR has been a partner of the Amihan Boys, giving the group training on environmental protection.

“We also provided them the materials for the hatcheries,” he said.

“The Amihan Boys have done a lot to protect the turtles,” he added.

Aside from turtles, Dahican also boasts of dolphins and dugongs.

Isip said the DENR and the city government under Mayor Michelle Rabat have started a project that would ensure the Amihan Boys will have a place to “set up camp”—Menzi Beach Resort.

“I hope we will be able to convince Mayor Carlo Rabat to continue support for the project,” he said.

The new mayor, however, refused to answer the Inquirer Mindanao’s phone call.

Among others, a question for the new mayor would have been: “What would you do with the FLAs, not only the one filed by Zamora but as well as those of his (mayor’s) two sisters and a sister-in-law?”