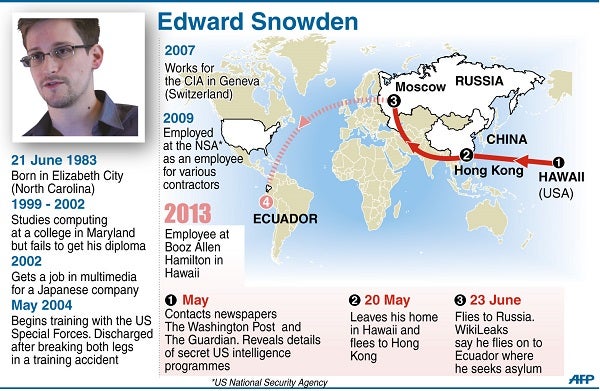 MOSCOW—US intelligence leaker Edward Snowden spent a fourth day at a Moscow airport on Wednesday with his travel plans still a mystery as Ecuador warned it could take months to consider his asylum request.

The man responsible for one of the biggest intelligence security breaches in US history has not been sighted since arriving in Moscow on a flight from Hong Kong on Sunday and according to Russia is still in a transit zone at Sheremetyevo airport.

“He has not violated Russian law, he has not crossed the border, he is in the transit zone of the airport and can fly anywhere that he wants,” Russian Foreign Minister Sergei Lavrov was quoted as saying by the foreign ministry.

But United States has revoked his passport and is applying persistent pressure on Moscow to hand over Snowden, who leaked sensational revelations of massive US surveillance programs to the media.

Anti-secrecy website WikiLeaks, which is assisting him, said he risks being stuck in Russia “permanently.”

Wikileaks had claimed Snowden left Hong Kong with a refugee document supplied by Ecuador but Quito said it was still reviewing his asylum application.

The leftist Latin American state, led by populist President Rafael Correa, is already sheltering WikiLeaks founder Julian Assange at its embassy in London as he faces extradition to Sweden over allegations of sexual assault.

“There is no passport, no document that was delivered by any Ecuadoran consulate,” senior foreign ministry official Galo Galarza told reporters.

Ecuadoran Foreign Minister Ricardo Patino said earlier during a visit to Malaysia that it could take weeks to decide whether to grant asylum to Snowden.

But he later backpedalled, writing on Twitter that reporters had misinterpreted him and that it could take “one day, one week or, like it happened for Assange, it could take two months.”

Venezuela’s President Nicolas Maduro, who by coincidence is expected in Moscow next week for an energy summit, said Caracas would also consider any asylum request.

‘He could stay in transit for 10 years’

President Vladimir Putin had on Tuesday described Snowden as a free man but indicated that Moscow was keen to see the back of him.

“Mr. Snowden is a free man, the sooner he selects his final destination point, the better for us and for himself,” he said, in a comment echoed Wednesday by Lavrov.

Snowden had been expected to board a plane for Cuba on Monday but he never took the flight and Putin hinted that his onward travel plans were still unknown.

Snowden’s extended stay in Moscow has prompted comparisons with the Tom Hanks hit film “The Terminal” about a man living in an airport, while British gambling website William Hill has opened betting on his final destination.

“Cancelling Snowden’s passport and bullying intermediary countries may keep Snowden permanently in Russia,” WikiLeaks said in a statement on Twitter.

Maverick Russian lawmaker and head of the Liberal Democratic Party Vladimir Zhirinovsky said that unless Snowden received a new passport he risked staying at Sheremetyevo indefinitely.

“Who is he without documents? He could sit for 10 years in that room (in transit). He’s going to be fed. But today, he is nobody,” he said quoted by RIA Novosti.

‘Escorting him at all times’

The dispute risks sharpening tensions between Washington and Moscow as well as Beijing when they are struggling to overcome differences to end the conflict in Syria.

“While we do not have an extradition treaty with Russia, there is nonetheless a clear legal basis to expel Mr. Snowden,” National Security spokeswoman Caitlin Hayden told AFP, saying he could be expelled on the basis of travel documents and pending charges.

US Defense Secretary Chuck Hagel urged Moscow to “do the right thing here and turn Snowden over to the United States.”

“He has broken laws,” Hagel told a press conference.

However, Putin insisted that Russia could not extradite the 30-year-old former National Security Agency (NSA) technician as it has no extradition agreement with the United States.

Putin dismissed speculation that Snowden—a potential intelligence goldmine—was being purposely held up at the airport to be interrogated by Russian spies.

WikiLeaks also denied he was being debriefed by the Russian security services and confirmed that Briton Sarah Harrison from its legal team “is escorting him at all times.”

There was no scheduled flight from Sheremetyevo to Havana on Wednesday but there is an Aeroflot service at 1005 GMT Thursday.

RIA Novosti quoted unidentified sources as saying Snowden had also booked on Tuesday’s flight to Havana but the reservation had been canceled a few hours before take-off.

Snowden abandoned his high-paying intelligence contractor job in Hawaii and went to Hong Kong on May 20 to begin issuing a series of leaks on the NSA gathering of phone call logs and Internet data, triggering concern from governments around the world.

Hong Kong, a special administrative region under Chinese rule that has maintained its own British-derived legal system, said the US request to arrest him did not fully comply with its legal requirements.

But White House spokesman Jay Carney lashed out at Beijing, saying its failure to “honor extradition obligations” had dealt a “serious setback” to efforts to build trust with new President Xi Jinping.