NIA officials in hot water, may be shipped out 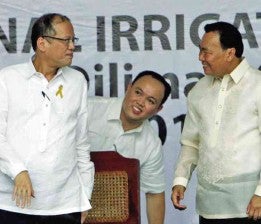 Publicly scolded by President Aquino on Tuesday for his agency’s poor performance, National Irrigation Administration (NIA) chief Antonio Nangel may be on the way out.

A Palace source told the Inquirer that Aquino had already asked for Nangel’s replacement as NIA chief as soon as possible.

“We’re now looking for a replacement,” said the official who had knowledge of the President’s directive.

Created in 1963, the NIA is a government-owned and -controlled corporation tasked with the development and operation of irrigation systems and provide irrigation services for the government’s agricultural programs.

Unless the President extends his appointment, Nangel is scheduled to leave the NIA on Sunday.

Nangel, along with NIA board member Ismael Tabije, representing the rice and corn sector, was appointed by Aquino to the agency on Dec. 12 last year, to serve from July 1, 2012, to June 30, 2013.

Nangel had previously served as NIA administrator in an acting capacity, from Sept. 6, 2010, to July 2012.

On Wednesday, a day after getting a presidential scolding for inefficiencies at the NIA, Nangel tried to defend himself by blaming his agency’s lackluster performance last year on Typhoon “Pablo,” which hit Mindanao in December last year.

But Aquino was skeptical and ordered Cabinet officials concerned to “verify” Nangel’s excuse, according to presidential spokesman Edwin Lacierda.

“We’re verifying the explanation (of the NIA) administrator, because he mentioned that (the whole of Mindanao) was affected by Typhoon Pablo,” Lacierda said.

The response from the Palace seemed to suggest Nangel should not hope to be reappointed.

When the Inquirer reminded him of Nangel’s expiring term, Lacierda said, “I don’t know.”

Lacierda said Malacañang had also launched an investigation into over a decade of failures and inefficiencies in the NIA.

On Nangel’s Typhoon Pablo explanation, Lacierda said it was unacceptable because the typhoon hit in December, when the NIA was supposed to be completing its goals after working on them for 11 months.

He noted that Pablo primarily affected Compostela Valley and Davao Oriental so Nangel and his subordinates cannot claim it as the reason for their low accomplishment in the entire country in 2012.

The NIA’s case should be a reminder to other governmental agencies that they have commitments to the public, Lacierda said.

“So this should not be a wake-up call. [F]rom the very start, the President has said that we have six years to deliver our commitments, and he expects [all agencies] to perform their mandate to their utmost best,” he said.

At the 50th anniversary of the NIA on Tuesday, Aquino devoted his entire speech to pointing out the lackluster performance of the irrigation agency.

Aquino said this was “suspicious,” pointing out that not once had the NIA fixed its record of “yearly failures.”

He then asked whether it was really a vice among NIA officials to make promises and then break them.

Aquino put Nangel on notice that he would check out his many excuses and unfulfilled promises.

He made it clear that he did not accept excuses or alibis.

Once he had talked to officials and they promised to work toward his administration’s goals, he said, he expected them to deliver, not to fail.

Aquino cited a long-delayed irrigation project in his home province, the Balog-Balog Dam.

Conceived during the first Aquino presidency and approved by the administrations of President Joseph Estrada and President Gloria Macapagal-Arroyo, the project remains on the drawing board to this day.

“I am now (the President), we have yet to [break ground] for this project,” Aquino said.

The dam is planned to provide irrigation to 39,150 ha of farmland in the towns of Concepcion, Gerona, Pura, Ramos, Paniqui, La Paz and Victoria, and the city of Tarlac.

It will also mitigate flooding in low-lying areas and give upland communities the opportunity to pursue inland fish production in the dam’s 2,004-ha reservoir.

The President said irrigation would dramatically increase paddy yields in Tarlac and other areas in Central Luzon, as it would raise the current once-a-year “harvest cycle” to five over a period of two years, or seven and a half harvest cycles over three years.