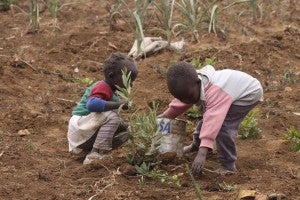 FILE – In this Monday, Aug. 17, 2009 file photo, children salvage the remains of a failed potato field at a farm in the Laikipia District, of Kenya, some 200 kilometers (120 miles) north of the capital Nairobi, in the wake of a prolonged drought which wiped out harvests throughout the country. INQUIRER file photo

GENEVA — The Pacific Ocean is unlikely to see either a warming El Niño climate phenomenon or its cooling La Niña opposite number through the end of the year, the UN’s weather agency said Wednesday.

The World Meteorological Organization (WMO) said forecasts showed that Pacific climate patterns were set to remain neutral through the rest of the year, although “a slight chance of La Niña or El Niño development remains.”

During the past year, indicators in the tropical Pacific, including ocean temperatures, sea level pressure and cloudiness, indicate that neither of the climate patterns has been present, it said.

In the first two months of this year, sea surface temperatures did approach “a borderline La Niña level,” WMO said, adding though that “the ocean-atmosphere system as a whole did not remain in a La Niña state for long enough to be considered a weak La Niña event.”

The UN agency said less than a quarter of the climate models it surveys predicted weak La Niña conditions between June and September, while less than one fifth of them expected to see El Niño develop before the end of 2013.

The two phenomena are significant factors in the fluctuations of the world climate.

El Niño occurs every two to seven years, when the trade winds that circulate surface water in the tropical Pacific start to weaken.

The outcome is a major shift in rainfall, bringing floods and mudslides to usually arid countries in western South America and drought in the western Pacific, as well as a change in nutrient-rich ocean currents that lure fish.

El Niño is often followed by a return swing of the pendulum with La Niña, which is characterised by unusually cool ocean surface temperatures in the central and eastern tropical Pacific, and which was last declared over in April 2012.

The two climate patterns are closely watched by scientists, who say that while they are not caused by climate change, rising ocean temperatures caused by global warming may affect their intensity and frequency.

WMO also stressed Wednesday that the two were “not the only factors that drive global climate patterns,” pointing for instance to the local climate impact of a “recently developed dipole pattern of warmer than average sea surface temperature in the eastern Indian Ocean and colder than average temperatures in the west.”