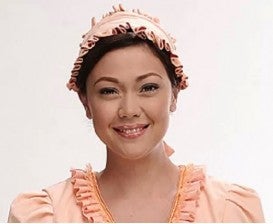 MANILA, Philippines — The International Labor Organization (ILO) and the Department of Labor and Employment (DOLE) are eyeing “Maya” as the poster girl for the promotion of the Kasambahay Law.

In an interview, Labor Undersecretary Rebecca Chato said negotiations have been ongoing to get actress Jodi Sta. Maria, who plays “Maya,” the nanny in the popular TV series “Be Careful with My Heart,” to be part of their information campaign about kasambahay law.

Chato said they saw Sta. Maria as a good example for HSWs because her character allowed nothing and no one to stop her from chasing and fulfilling her dreams.

“She worked hard to uplift herself so she would not remain an HSW forever,” the DOLE official said, adding that the ILO has been helping them promote the law.

In the hit TV series, Maya is an idealistic provincial girl who dreams of becoming a flight attendant but ended up becoming a nanny for a wealthy family in Manila. She took the job in exchange for an educational scholarship from her boss and eventually fulfilled her ambition.

Ana Valencia, ILO national project coordinator for domestic workers program, said that the ILO has already forged an agreement with SM cinemas for the showing of a series of infomercials on kasambahay law beginning September.

Valencia agreed with Chato in saying that Sta. Maria could be a good kasambahay model as many HSWs can easily identify with her character as “Maya.”

Aside from Maya’s love story, Valencia said Sta. Maria’s character is a good example as she was able to study and  her employer treats her well.

The kasambahay law entitles house help to wages of at least P2,500 if they are employed in Metro Manila, P2,000 in other cities and first-class municipalities, and P1,500 elsewhere in the country.

Chato said the SSS, Pag-IBIG and Philhealth have been working on developing a unified system of registration and enrollment of HSWs.