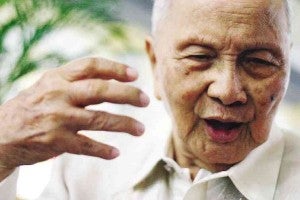 DR. VICENTE CATACUTAN says his book, “The Pisamban of Apung Iru,” is a crowning glory of his work as a lay leader. E.I. REYMOND T. OREJAS

APALIT, Pampanga, Philippines—It’s never too late to write a book, and Dr. Vicente Catacutan has not let old age, even prostate cancer and heart ailment, get in the way of his dream.

Catacutan, 90, may well be the oldest recently published book author in the country, tackling Catholic faith and the history of a small riverside town of Apalit in Pampanga with big contributions to the Philippines.

And because his work, “The Pisamban of Apung Iru” (The Place of Prayer and Worship of St. Peter the Apostle), is out and caps his 70 years of service as a Catholic lay leader, Catacutan said he felt accomplished.

“I am so happy today. [The book] is a crowning glory of my work. I’m ready to face my creator,” he told the Inquirer at the book’s launch at the Catholic church in Apalit on Saturday.

Perez, also an architect, has brought students, seminarians and priests by the busloads to the church in Apalit since 1980. In those tours, he did two things: Explain the architectural features of the structure that was built under the supervision of Augustinian priests and show the paintings on the ceilings as teachings in salvation history, from the creation to the martyrdom of St. Peter, the first Pope, and St. Paul.

“[Perez] knows so much about our church than we do. I vowed to learn more but I got busy with projects,” said Catacutan, who is reverently called “Tang Enteng.”

He was referring to projects mounted by the Apalit Small Christian Communities (Asccom), a name given by then San Fernando Archbishop Oscar Cruz to Bible study groups.

Asccom started with the Aling Charing Free Clinic in 1980 from the P5 contribution of Rosario Sanchez, a poor woman from Quezon province. It then set up a multipurpose cooperative in 1990 and founded a community medical center in 1994 with the help of the late Bro. Andrew Gonzalez, a former education secretary and whose mother was a Kapampangan, and the late Col. Ricardo Galang.

Now, the cooperative, with a startup capital of P65,000, has P200 million in assets, Catacutan said. From 1980 to 1992, he was involved in the Pampanga Bible translation project.

“I forgot about the book. But since I’ve done so much for the body, it was time to attend to the soul,” he said.

The book, published by Asccom, comes with an imprimatur of Archbishop Paciano Aniceto. At the launch, Aniceto said the book “celebrates the heritage of faith in Apalit where people exemplify God by their works.”

“Without faith, [the church] is just a building … [it] is the community, which must always be in the service of the faith,” Aniceto said.

“This book is a fitting swan song for its author. It is a testament to the endurance of the precious heritage that the colonial church of San Pedro Apostol is for Pampanga and for the natives of Apalit,” David said.

Catacutan devoted a chapter for a guided spiritual travelogue, a product of understanding the paintings and their Biblical context.

Citing information from Msgr. Jose de la Cruz, he said many Apalit folks are deeply religious because the Archdiocese of Manila established in the town the first two Catholic organizations, the Apostleship of Prayer and the Adoracion Nocturna Filipina, after those in Manila.

“Cursillos” (spiritual retreats) were also held at the old site of the Mater Boni seminary, now the Dominican School, beside the church fronting the Pampanga River.

The Augustinians established the Catholic community on May 17, 1590. An earthquake in 1863 destroyed the first church built in 1629. The present church was built under the supervision of Fr. Antonio Redondo based on a plan by Don Ramon Hermosa, assistant officer to the minister of public works, with Mariano Santos of Guagua as foreman.

The foundation was laid in 1876 and the crucifix-shaped structure was inaugurated on the feast days of St. Peter from June 28-30, 1883.

An unknown Apalit native, who was a pupil of Italian illustrator Alberoni, made the paintings. The twin towers were finished in 1896 by Fr. Toribio Fanjul.

It was under Fr. Rolando Lopez that the church’s bells were restored, the 12 stained glasses were installed and the repairs were done.

The “retablo” (wooden niches behind the major altar) survived major alterations or destruction because its origin had been preserved through an account by former town official Ricardo Dalusung, Catacutan said.

Don Jose Sioco of Barrio Sulipan was the biggest contributor to the church’s construction. Redondo thanked him by placing the patron saints of his three daughters in the niches.

Apalit celebrates the feast day of St. Peter for three days. The owner of the ivory image is Don Pedro Armayan Espiritu, inheriting it from his parents who acquired the image from Maxima Santos of Masantol town before 1840 in exchange for a land in Apalit.

The fluvial parade, which had its beginnings as a tradition in the Espiritu family, became a town affair.

The miracles attributed to St. Peter—fish jumping out of the water during a fluvial parade and the town being saved from the cruelty of the Japanese during World War II—are documented, including his supposed appearances in the town as an old man every 33 years.