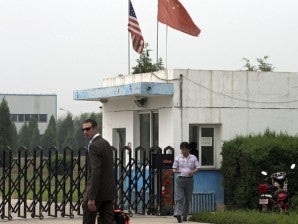 An unidentified U.S. Embassy employee, left, and Chinese official walk outside the closed gate at Specialty Medical Supplies plant where American Chip Starnes, co-owner of the plant, not in picture, is being held hostage at the Jinyurui Science and Technology Park in Qiao Zi township of Huairou District, on the outskirts of Beijing, China Monday, June 24, 2013. An American executive said Monday Starnes has been held hostage for four days at his medical supply plant in Beijing by dozens of workers demanding severance packages like those given to co-workers in a phased-out department. (AP Photo/Andy Wong)

BEIJING — An American executive held in his Beijing medical supply plant by angry workers said Tuesday’s he’s waiting for his lawyers to arrive to resolve a compensation dispute that highlights tensions in China’s labor market.

Chip Starnes was enduring a fifth day of captivity at the factory in the capital’s northeastern suburbs that makes products for Coral Springs, Florida-based Specialty Medical Supplies.

About 100 workers are demanding generous severance packages identical to those offered 30 workers being laid-off from the company’s plastics division. The demands followed rumors the entire plant was being closed, despite Starnes’ assertion the company doesn’t plan to fire the others.

“There’s been no solution is terms of anything between us and them,” Starnes told The Associated Press from his office. He said he was waiting for his lawyer to arrive and then would “start to work on some sort of solution to the issue one way or another.”

A local union official representing the workers in talks with Starnes, Chu Lixiang, said the workers were demanding the portion of their salaries yet to be paid and a “reasonable” level of compensation before leaving their jobs. Neither gave details on the amounts demanded.

Chu said Starnes hadn’t paid the workers for two months. She said they feared the plant was closing and that he would run away without paying severance.

Starnes said that since Saturday morning, about 80 workers had been blocking every exit around the clock and depriving him of sleep by shining bright lights and banging on windows of his office.

The standoff points to long-ingrained habits among Chinese workers who are sometimes left unprotected when factories close without severance or wages owed.

Such incidents have been rarer as labor protections improve, although disputes still occur and local governments have at times barred foreign executives from leaving until they are resolved.

Starnes, 42, said he’d been coerced into agreeing to meet workers’ demands by Tuesday.

Starnes said the company had gradually been winding down its plastics division, planning to move it to Mumbai, India. He arrived in Beijing a week ago to lay off the last 30 people. Some had been working there for up to nine years, so their compensation packages were “pretty nice,” he said.

Some of the workers in the other divisions got wind of this, and, coupled with rumors that the whole plant was moving to India, started demanding similar severance packages on Friday, Starnes said.